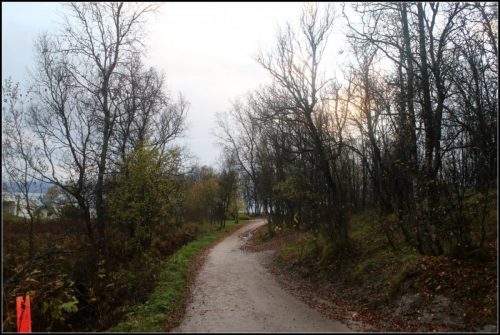 The muddy path in Tromso

Since I did not have anything else to do in Tromsø (as I had missed the cruise that would take me around the Fjords), I decided to head to the beach. I remembered, my roommate Katharina had told me that the beach was about 30 to 45 minutes’ walk from the city center.

It was late afternoon at around 3 PM, so I still had time before the sunset (which was at 5:30 PM). I thought for a second and I started walking in the direction of the beach. I walked for 45 minutes, but there was no sign of the beach. On the way, I saw a swing in the park. The park was empty and it had some old buildings around. Even though I (generally) avoid such places, I decided to head to the swing (Yes, I love them too). I swang (if that word exists :/ ) on the swing ( 😀 ) for about 15 to 20 minutes.

After taking some pictures at the swing, I decided to start walking again to the beach. As I was lost (of course I was), I asked one of the fellow walkers. His name was Oscar, who was originally from Stavanger (a city down south of Norway) but had moved to Tromsø to study. He was doing his Masters in Mathematics and Physics, but would be studying about drones the next year (pretty awesome right!).

Where was this Muddy path?

Oscar walked with me till a crossing of the road, he told me to take a left on that crossing and walk till the end of that road to reach the beach. After I took a left, I saw that it was not exactly a road, it was more of a muddy path with tall trees (with no leaves) on both the sides of the road.

I walked down the path and saw the beautiful amazing sights of Tromsø. The sight was of the amazing milky water with the snow-capped mountains in the background. There was absolutely no-one on the beach (Yes, no one goes to the beach when it is raining and it was continuously raining in Tromsø from the time I had landed). I saw some ducks on the water though and the sights were spectacular. I started clicking pictures – lots and lots of them. I had not taken many pictures of myself in Norway (well downside of traveling solo), so I used this opportunity to take pictures of me with the breathtaking backgrounds. There were some benches next to the beach and I used them as my tripod.

The sunset was astounding. The sights of the sunset at the beach with the snow-capped mountains can only be felt and any words to describe them would be an understatement.

I was awed. I stood there watching the beautiful sunset – I lost track of the time. The sun had set and it had started to get dark.

I realized that to head back to the bus stop, I had to walk through that muddy path with the tall trees. I panicked. I quickly packed all my stuff and started walking (I had two choices – either walk through those dark bit of scary path or stay at the beach in the freezing cold weather with no-one, I chose the first). I began chanting all the God’s names, especially my favorite one, Lord Ganesha.

To add some drama to my panicked state, I noticed the two ravens, on the left side of the path, sitting on a branch of the tall trees. They were crowing (screaming in my words) and were hopping one by one from one branch of the tree to the other, ahead of me. The scene reminded me of the crime scenes shown in the TV series ‘The Mentalist’. I freaked out and was super scared.

I remembered all the Gods and cursing myself for all the troubles I put myself in. I ran. I ran for my life, till I reached the main road (crossing from where I had taken a left). I noticed that the two ravens had stopped following me. I was very angry. I had no clue as to what joy those ravens got for traumatizing and scaring me for no reason. ‘Like seriously birdies?’ ‘Are you for real?’

Lesson learned: No watching ‘The Mentalist’ anymore, everything looks like a bloody crime scene.

4 thoughts on “The muddy path!”