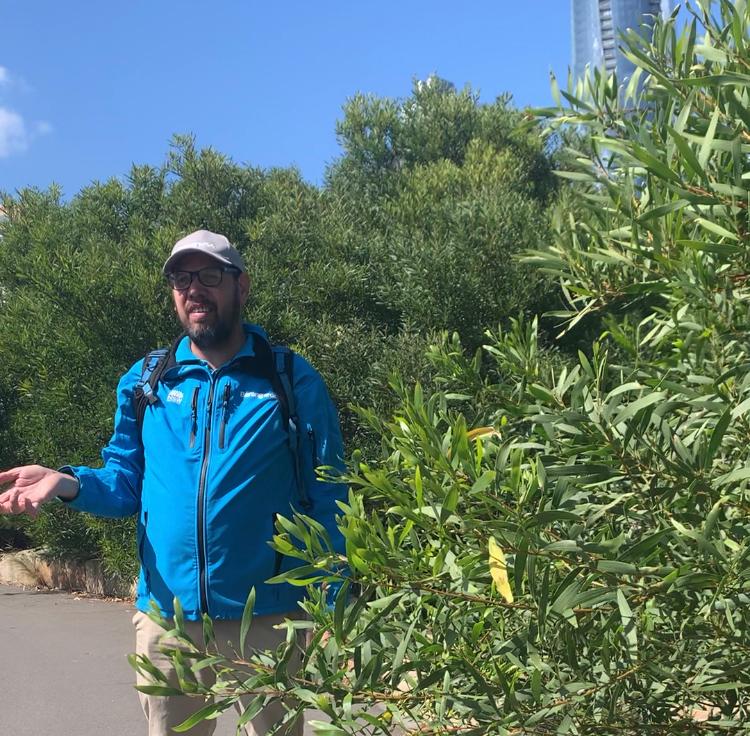 Late last year when I was exploring Sydney, by being a tourist in my own city, I discovered the Barangaroo aboriginal cultural tour run at Barangaroo Reserve. And that is when I met Tim Gray, a guide at the cultural centre. Towards the end of our cultural tour, he told us a little story about how he was once a homeless person and is now a guide at the Barangaroo cultural centre. I knew that instant that I had to tell his story to my audience. He is surely one of the very few interesting and inspirational people I have met in my life.

Tim Gray has contributed for an article that explains the things only an aboriginal cultural tour guide knows.

Tim Gray’s story is the perfect example of what Dave Wilson once said “Sometimes life gives you a second chance, or even two! Not always, but sometimes. It’s what you do with those second chances that counts“.

Tim Gray or Timothy Gray is a guide at Barangaroo aboriginal cultural centre. He is from an aboriginal background belonging to Gumbaynggirr/Kumbainggar and Wiradjuri tribes. Born in Macksville, a small town in the Mid North Coast of New South Wales (NSW) in Australia, he was given away by his biological mother to his foster parents when he was just 8 months old.

Having grown up in Western part of Sydney, he had a good and normal childhood until the age of 12 years. After his 12th birthday, his entire life turned upside down when his foster mother passed away and his foster siblings ran away from home. Having pushed him off the edge, he eventually left his home to become a homeless, alcoholic and a drug addict. He felt lonely and helpless at that time and to overcome his fear, stress and anxiety, he found relief with alcohol and drugs.

“Thinking about suicide and talking to people about my feeling was a sign of weakness. ~ Tim Gray.”

After struggling for many long years, life gave him a second chance. One day at around 3 AM, his cousin Reese turned up out of nowhere, as a glimmer of hope, that gave Tim a reason for living. Tim realised he needed help and he decided to go into an aboriginal rehabilitation centre (Alcohol Anonymous (AA)) to become better and sober.

In time after he became sober at the rehab, Tim landed his first job at Woolworths. While working at Woolworths, he took another step and pursued his dream of becoming a musician. He studied music at TAFe and set up his own band. Tim’s musical band is a 7 piece reggae style band called Green Hand Band. Green Hand Band aims to break the barriers.

I wrote my first song in the rehab. ~ Tim Gray

Tim also got involved with an aboriginal empowerment association called the Tribal Warrior. And his involvement is what lead to him becoming more connected to aboriginal culture. By having a job at Barangaroo and being closely connected to Tribal Warrior has helped him become spiritual and get through his tough times.

Hell is a life of living in addiction. ~ Tim Gray

Lastly, Tim says he wants to contribute more to the aboriginal culture and society through his music and his story of how he overcame his addiction. And most importantly have a message to all the youngsters in a similar situation to not lose hope.

Episode “Believe in Second Chances” on “It happens with everyone”

At ‘It happens with everyone’, we had the pleasure to interview Tim Gray and listen to his story. He spoke to us about all the hardships and how his life took turns and pushed him down. But when life gave him a second chance, he leaped and took the chance.

About It happens with everyone

‘It happens with everyone’ is a podcast aimed to bring out the stories from people walking different phases of life. The episodes of the podcast are about the common people sharing their extraordinary and inspiring stories. It is to showcase that when someone needs help, there is always help available. They just need to reach out.

14 thoughts on “Tim Gray, from homeless to becoming an aboriginal guide”