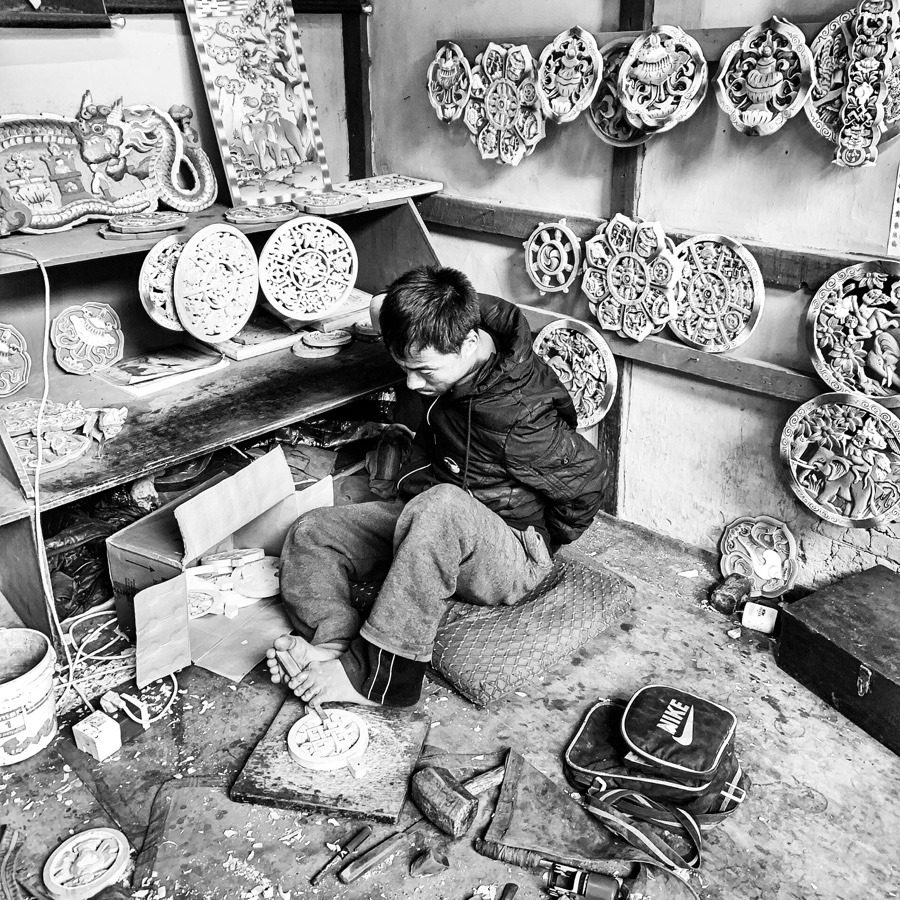 Travel is the best teacher. It allows you to meet many people around the World. You sometimes also meet a few people in life who make a mark, a mark for a good cause. These are the people who are an inspiration and who make you believe that mind is stronger than anything. And one can achieve anything they wish if they truly want something. As they say “Your strongest muscle and worst enemy is your mind. Train it well” and one cannot deny this after reading the story of Pema Tshering. This post is a story of Pema Tshering, a “foot” artist from Bhutan.

Who is Pema Tshering?

Pema Tshering is a paralysed 30+ years old artist, whom you will see working in his workshop when you visit Simply Bhutan on your travels in Bhutan. He is a famous person, in fact a celebrity in Bhutan and he inspires many by his story and achievements. He has a small shop called Foot Craft where he sells his artworks (wooden carvings and paintings) in the compounds of Simply Bhutan.

Simply Bhutan is a small touristy museum in Thimphu that provides an insight into the culture and traditions of Bhutan. And this is one of the must visit places while in Thimphu.

Pema Tshering is not only an artist but also a national archer. He supposedly participated in Bhutan Paralympics in the year of 2005. He uses his feet for archery. As part of the Simply Bhutan tour, one can visit his workshop and interview him while he works on his art.

Pema Tshering is adorably known as the “Foot” artist of Bhutan.

What is Pema’s story?

Pema Tshering was diagnosed with cerebral palsy when he was a child. He was adopted by Queen Mother Tshering Pem Wangchuck after being abandoned by his own birth mother at the age of 6. He also faced congenital deformities in his spinal column, due to which he has limited use of his legs and hence cannot walk.

At his grandparents house in a Bhutanese village, he learned how to use his legs as his hands and started to make bow and arrow out of bamboo. When he turned 18, Queen Mother Tshering Pem Wangchuck accidentally stumbled upon him when she paid a visit to his village. And that is when his story changed. The Queen Mother sponsored his education at a reputed art school in Thimphu. This is where he learned how to carve wood and paint.

The kindhearted Queen Mother then helped him open a small shop at Simply Bhutan to sell his art and make money for his living.

What are Pema’s achievements?

Pema Tshering, as I mentioned above is an inspiration to the entire World. Paralysed from above the hip, Pema is an artist who uses his legs to create art. He has used his legs as hands throughout his entire life. Even though paralysed, he is the one to teach that if there is a will there is always a way.

Pema Tshering has achieved a lot at such young age. Some to name are that he earns his own bread through his art, he takes care of his parents even though they abandoned him when he was little and he is a national level archer. All these by just using his feet and being paralysed hip up.

He has exhibited his artworks in various exhibitions in Bhutan and also internationally including New Delhi (India).

Pema Tshering dreams of becoming an art teacher and to teach his students someday. He also wants to work in the New York city for a few years before returning to Bhutan where he wishes to start an art business of his own.

Where can you purchase Pema’s art?

Pema Tshering’s artworks are extremely beautiful and detailed. It is so intricate that it is hard to believe that they have been made using only the legs and not by hands. I wish I had bought one of his artwork during my visit to Simply Bhutan. Since I did not do that, I have been researching on the places where one can buy his art.

Note: I did contribute some money towards Pema’s work even when I did not buy anything from him. There is a small box at his workshop where one can give as much as they wish.

There are very few times where I have been impressed with people. It is hard for me to get inspired and take inspiration. Pema Tshering is definitely one of those whom I have been inspired from. Seeing him made me realise that even when life can be unfair, it truly depends on how one can take it and what one can make out of it. In spite of life throwing so many huge blocks at him, he is a person who smiles wholeheartedly and who is extremely lively.

For other travel stories from my Bhutan travels, refer section Bhutan.

9 thoughts on “An inspiring story of Pema Tshering”