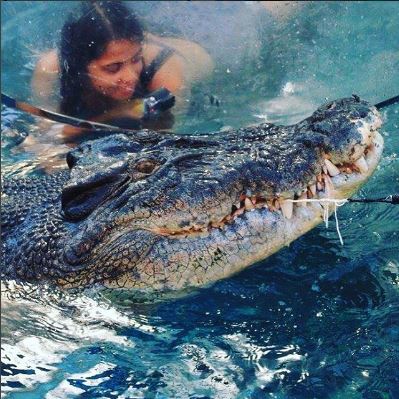 Yes, you heard it right. It’s the cage of death – the only crocodile dive in Australia. Crocosaurus Cove is a reptile park in Darwin and is an exhibit for reptiles, turtles and crocodiles. Being the adventure junkie I am, I decided to head to Darwin for the ANZAC long weekend and do the Cage of Death. I booked well in advance and was all set. (Of course, my friends did call me crazy!)

What is Cage of Death?

Cage of Death is a popular tourist activity in Darwin where one dives in a pool that contains a large saltwater crocodile. The person taking part in the activity is placed in a cylindrical cage that is then immersed into the pool.

On the day of Cage of Death dive

The dive was at 10:30 AM, but the excitement was kicking in, so I reached Crocosaurus Cove well ahead of time at 9:30 AM. I was given a wrist band at the entrance, which allowed me access to the park for the whole day.

After the briefing, the staff took me to the place where I could finish the paperwork and hold the baby crocodile. I tried to finish my paperwork as soon as possible. I was specifically told that the cage had some small strips of openings for the water to flow in and some people in the past had actually tried to insert their fingers into them to touch the crocodile. And the repercussion of doing that stupid mistake is that the person could lose their finger  forever- as simple as that!

Once done with the paperwork, the fun stuff began, where I had a photoshoot with a baby freshwater crocodile.

On seeing the board at the entrance, I inquired about holding a baby crocodile. I was instructed to walk upstairs to the tank. As I walked closer to the tank, I saw a huge crowd gathered. I was curious too – I peeped into the tank. I saw the cage that had two people inside and a huge massive crocodile swimming around the cage. I had a chill in my spine. The crocodile was scary and big – very big.

The snout of the crocodile was taped and it could not open its mouth to bite.

Note: If asked now, I would not recommend holding the baby crocodile as I felt that the way the crocodile’s mouth was taped was not right.

After the photo shoot, it was almost time for me to change and head for the dive. I was nervous. I was alone in the cage and I was getting into a tank of a massive big crocodile. My adrenaline was pumping.

I approached the tank. I had not noticed that there were two tanks – one was empty where the cage was and the other was where the crocodile was. The empty tank was used for people to get into the cage. Near the empty tank were the three staff – the first – who had given me the safety briefings, the second – who was preparing the cage for my dive and the third – the camera guy who would take pictures of mine during the dive.

Whilst the cage was being prepared, I started inquiring about the crocodile. I learned:

I climbed up the ladder from outside the empty tank and climbed down another ladder to head straight into the cage. I was trying to calm myself and was reaffirming ‘You can do it Raks’. After I got into the cage, the roof of the cage was closed with a mesh. The cage was slowly lifted up from the empty tank and moved towards Choppy’s tank. When the cage was slowly moving down in Choppy’s tank, I tried to look around to see where Chopper was. At first, I could not spot him, but as the cage moved down closer to the water, I saw him towards the right of the cage and he was looking up – I think at the cage. I gulped and panicked. I was getting closer to him – a crocodile – a big crocodile.

The cage was half immersed inside the water. I had to go under the water to see Chopper. I was struggling to breathe underwater (I am not a swimmer), trying to look for Chopper (I was wearing the snorkeling glasses), recording on the Go Pro, posing for the pictures underwater, and making sure I don’t put my fingers in those outlets. But every time I saw Chopper, I was so thrilled and happy. A huge saltwater crocodile swimming around your cage – Not something that happens every day, right? 😀

I was in the cage for 15 minutes and the first 10 minutes was where Choppy was shown the chicken piece but was not allowed to eat. This was to ensure that he was around the cage and put up a show. I remember there was this one time, where Chopper tried to grab a bite of the chicken, and whilst doing that, he hit the cage with his jaw. Oh my God! That was a big loud thump. I had never ever experienced that in my life. That clearly showed the power and the strength of his jaws.

The last 5 minutes was where Chopper was allowed to take a bite. The cage was pulled up so the cage had just some water inside – may be an ankle-length. This was the time where I was allowed to remove my snorkeling glasses and lie down in the cage to watch Chopper. He was swimming around the cage and casually taking a bite of the chicken. It was awesome – Looking at him around so close was awesome.

After 15 minutes of the dive, the cage was lifted up and moved towards the empty tank. And my experience of being so up close was over.

I had never come so close to the World’s most dangerous animal – a saltwater crocodile. And the entire experience of the dive was so amazing and completely safe. I thoroughly enjoyed being so close to Chopper. The staff had taken all the precautions to make the experience a memorable and pleasant one. Thank you Crocosaurus Cove for this wonderful experience.

7 thoughts on “Experience the Cage of Death (Darwin, Australia)”