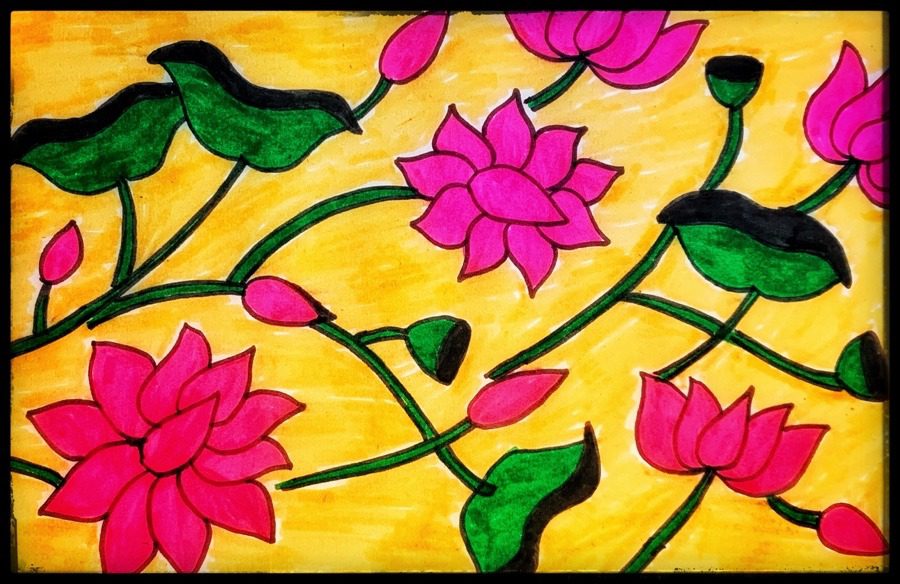 I have been very fascinated by Indian folk art and the stories/ history each of those art forms have. The more I have been reading about Indian art, the more I learn that there are so many forms of them. And during one such research, I found the folk art of Pichwai paintings. What makes it interesting is that Pichwai paintings talk about the folk tales of Lord Krishna that I always heard from my father as bedtime stories.

Last year in 2020 during the lockdown, I learned about the other forms of Indian paintings and how they originated and where in India they can be purchased.

What is Pichwai painting?

Pichwai paintings are a form of art that depicts the story of Lord Srinathji and Lord Krishna. It was originated in the Nathdwara town of Rajasthan, dating back to 400 years ago. The word Pichwai translates to “handing at the back”. In Sanskrit, “Pichh” means “back” and “wais” means “hanging”.

Pichwai paintings are usually created by a group of artists together. The artisans would sketch the paintings on a cloth and colour it with organic and natural colours such as gold, silver, saffron, coal and so on. The art is mainly painted on fabric which are hung in the temples. Colours and images were used to showcase the seasons, peacocks represented the rainy season and pink colour represented the summer season. Lord Krishna grew into a cowherd. The legend says that the cows answered to Lord Krishna’s flute and were intoxicated by the music.

Lord Srinathji is a younger 7 year old form of Lord Krishna. According to legend, the Lord Srinathji self manifested from a stone and emerged on the Govardhan Hills. Initially the image of Lord Srinathji was worshipped in Govardhan Hills in Mathura. Later the image was shifted from Mathura to Agra, where it was kept for 6 months. In order to save it from the then Mughal Ruler Aurangazeb, the image was then moved further south. But when the image was being carried by the priests in a chariot, at one particular spot at Sihad village of Mewar the chariot was stuck in mud. The priests built a temple with the permission of then King of Mewar.

The major highlight of Lord Srinathji’s painting is the diamond on the chin.

Where can you find Pichwai paintings in India?

Pichwai paintings are truly a treasure and having one of those paintings can add so much decor to the homes. It is said that a good and complicated Pichwai painting takes up to 3 to 6 months to be created and costs more than $1000. I am so glad to have learned about this amazing form of painting style. I am also happy that the artists around India are cherishing our old forms of art and showcasing them at the global level.

Do you love Pichwai paintings or do you do these style of paintings? Let me know in the comments below! I would love to feature you on my social media page.

If you loved reading this article, then you will love other articles related to art. Refer the section “Art is Love” on my blog.