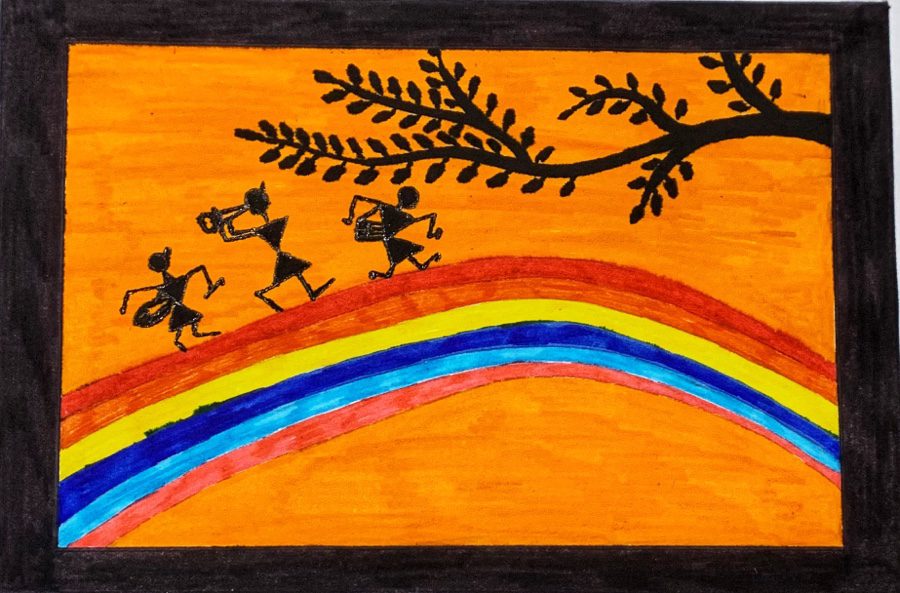 The past few months have been extremely hard on all of us. During this lockdown period, I have revived my old skill in painting and sketching. I have also been reading a lot about different cultures, especially Indian culture. And I have discovered that India not only has many languages and religions, it also has a diverse painting/art style. Each state has a unique art style that forms the Indian culture. All these painting styles also have a history behind them. In this post, let me take you on a virtual journey to different states of India through their traditional painting styles.

Types of paintings in Indian culture

Chittara painting is a folk art style of the Deevaru community. The Deevaru community are the people living in and around North and South Canara region in Karnataka. They use natural resources such as rice paste and yellow seeds for paintings. The paintings are generally drawn and painted on the walls of the houses, depicting the daily lives of the tribal people.

The Gond painting style is a folk tribal art done by the Gond people of Madhya Pradesh. The paintings have a history of 1400 years and the word Gond comes from Dravidian expression Kond which means the green mountain. They were used to record the history of the tribe by showcasing the daily lives of the people and animals. The paints are usually done using natural resources such as plants, charcoal, and soil. And the style involves using lines and dots to portray the details.

Interesting fact – Did you know that Gond paintings resemble aboriginal art from Australia?

Kalamkari painting is based in the states of Andhra Pradesh and Telangana. The word Kalamkari literally means free drawing from a pen. The art form involves natural colours and is a twenty-three steps process. It is usually done on the cotton fabric and is entirely hand made. The paintings usually depict scenes from the mythological Hindu stories such as Mahabharata and Ramayana.

Also known as Mithila painting, Madhubani painting style is practiced in the state of Bihar, which is the Mithila region. The painting was introduced by the women in the Madhubani region in the kingdom of Janak – Sita’s father in the mythological story of Ramayana.

The craftswomen use a variety of tools such as twigs and brushes to do the Madhubani painting. This style of painting was used to decorate the walls of the houses to seek peace and prosperity from God.

Mughal paintings are generally confined to miniature paintings. They were developed in the Mughal Era between the 16th and 18th centuries. The Mughal style included the making of portraits mostly and sometimes of animals and plants. These paintings were usually either drawn and painted in books or kept in albums.

Unfortunately, I did not find any information on where to find the Mughal paintings in India currently.

Pattachitra painting is an art form based in the eastern states Orissa and West Bengal. It is known for depicting the mythological Hindu narratives such as the story of Goddess Durga or Lord Jagannath. In Sanskrit language, Patta means cloth, and Chitra means a picture. The paintings are generally made on clothes.

The Pattachitra painting style in Orissa dates back to the 5th century BC. The best work is to be found in the Puri region of Orissa. It is one of the oldest forms of the art living in the World. The artists who practiced this art form were known as Mohapatras.

In Orissa, the paintings are performed on the cotton-based cloth. The paintings are unique and colourful. Generally, traditional colours such as red, green, yellow, white, and blue are used for painting.

Pithora painting style is an art form practiced by Rathwaas and Bhilalas tribal people in Gujarat. These paintings are done either to thank God or for a wish to be granted. This painting style is more of a ritual rather than an art form. It is usually done on the inner three walls of the houses.

Interesting fact – The three walls of the house where the paintings are done are first treated with two layers of cow dung and one layer of chalk powder. Unmarried women get these material. And this whole procedure is known as Lipna.

Rajput painting style dates back to the 17th century and is a form that depicts the stories from the Royal courts of Rajputana. They also illustrate stories from Ramayana and Mahabharata.

The colours are extracted from minerals, shells, and plants. The process of making a Rajput painting is a lengthy process and it generally takes up to weeks to complete.

Interesting fact – The famous Rajput paintings were once miniature paintings.

Warli painting style is a tribal painting, originating in the Western ghats (Maharashtra) of India. Warli folk art dates back to the 10th century. The art is centered around the elements and concepts of Mother Nature.

The painting is usually done on the walls of the huts. The artists use a set of geometric symbols such as triangle, square and a circle to depict the paintings. Warli art is very closely connected to nature, that even the symbols used are related to nature. The triangle represents mountains and pointed trees, square represents human invention and the circle represents the sun and the moon.

India is a very big country and it has many more folk art and traditional painting styles than mentioned in this post. Indian culture is truly one of the oldest and the biggest cultures in the World with a lot of history. This post was my attempt to document and write about my research. And I do hope you have enjoyed the travel journey through the various paintings.

You will also love reading

60 thoughts on “Types of paintings in Indian culture”