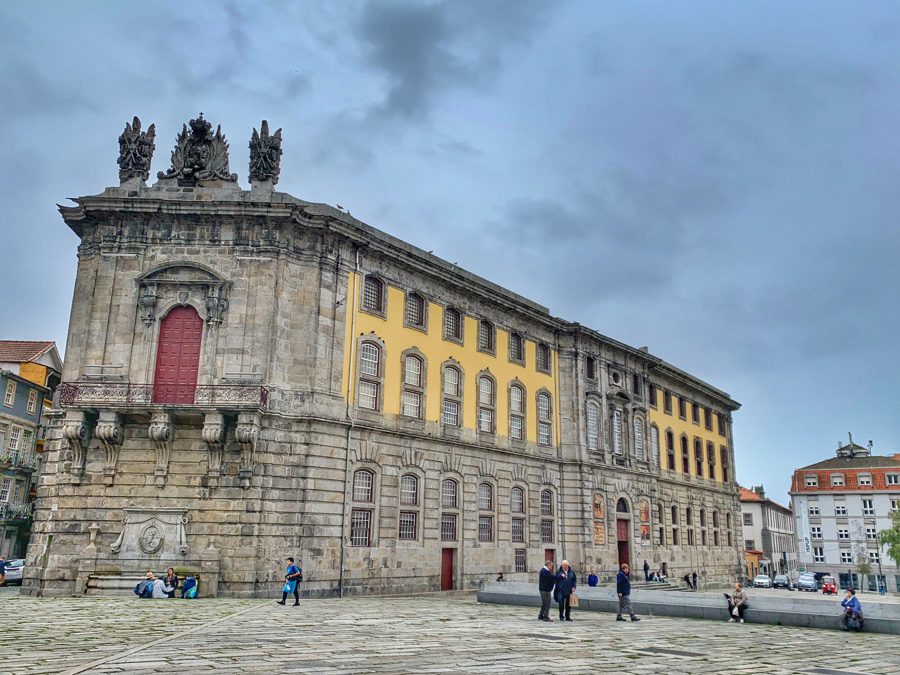 I absolutely loved Porto in Portugal. It was a treat to take pictures of this spectacular city. The colourful buildings and the amazing display of the tiles were something to look for. And the pavements were even more beautiful. The city has an amazing vibe to it and anyone, I mean anyone can fall in love with this city.

Porto is a coastal city and one of the popular cities in north of Portugal. The city is known for its cobbled streets, unique tiles, six famous bridges and port wine production. In the year 1996, the historic centre of Porto was declared as a UNESCO Heritage site. One at least needs two days to explore Porto and the best time to visit is between May and September as the weather is warm.

I stayed at Selina Porto Hostel when I was in Porto and I absolutely loved it. View Hostels in Europe for all the stay details during my travels in Europe.

I strongly believe that there is no other way to explore a city than by walking around or taking some of the walking tours. And hence, I took a 3 hours walking tour with a tour agency to cover most of the important landmarks within the city centre.

The walking tour was organised by ‘Living tours Viagens e Turisma Lda‘ (+351228320992) tour agency and the cost of the tour was 12 Euros. I booked the tour through Viator website or one can just walk into their office which is also the starting point of the walk and book it.

My guide ‘Jasmine‘ throughout the tour was absolutely brilliant. She was very knowledgeable and knew the answers for most, if not all, questions.

Opened in the year 1916, Sao Bento Railway Station is a 20th century railway station in Porto. The station has been declared a UNESCO World Heritage site and National Monument of Portugal. It was designed by a local architect Jose Marques de Silva.

Sao Bento Railway Station is considered as one of the World’s most beautiful railway station.

Porto Cathedral is one of the city’s oldest monuments in Porto. It is a Roman Catholic Church located in the historical centre of Porto.

Also, known as Batalha Square, Praca da Batalha is a historical public square in Porto city. According to tradition, the name Batalha means battle and it comes from a battle that was fought in the 10th century that resulted in the destruction of the city.

A traditional market in Porto is the Mercado do Bolhao.Opened in 1914, the market sells local fresh products such as meat, fish and vegetables. I did not visit this place as part of the tour as it was closed because of refurbishment.

Porto City Hall is a monumental historical place in Porto. The building has six floors and clock tower and the interior is made up of marble and granite. The main highlight is the black marble entrance hall.

The Livraria Lello is a famous bookstore in Porto. The reason the bookstore is famous is because of its architecture, which has supposedly inspired JK Rowling’s depictions of Harry Potter’s Hogwarts.

Ensure to book the entrance fee before going as the queue tends to get extremely long and pre-booked tickets can get you in quicker. The entry fee is 5 EUROS and can be booked online. Note: The entrance fee is not covered in the walking tour.

A beautiful viewpoint that overlooks the city of Porto and its pretty houses is the Miradouro da Vitoria. It is great for capturing pictures of the bridges, city and the river.

Miradouro is the Portuguese word for viewpoint.

Ribeira Square is a historical square in Porto, along the Douro River. In the year 1491, the buildings around the square were destroyed in a fire and the houses were rebuilt. In the year 1971, the square and the surroundings were classified as the Property of Public Interest. It is one of the most favourite spots for tourists.

I found Porto and Portugal overall as an extremely safe city and country for solo female travelers. I did not have any issues traveling alone through this wonderful city. I did walk around the city during nights but I did stick to the lanes that had a few people and lights. However, like any other city be cautious and know your surroundings especially at nights.

I honestly loved Porto over Lisbon and I had such good time in this amazingly beautiful city. I would love to go back to the city again to spend more time and live as a local. Porto was not an expensive city and it was easy to walk around and navigate in the city. So, I definitely recommend visiting this cute coastal city of Porto and experiencing the culture and history.