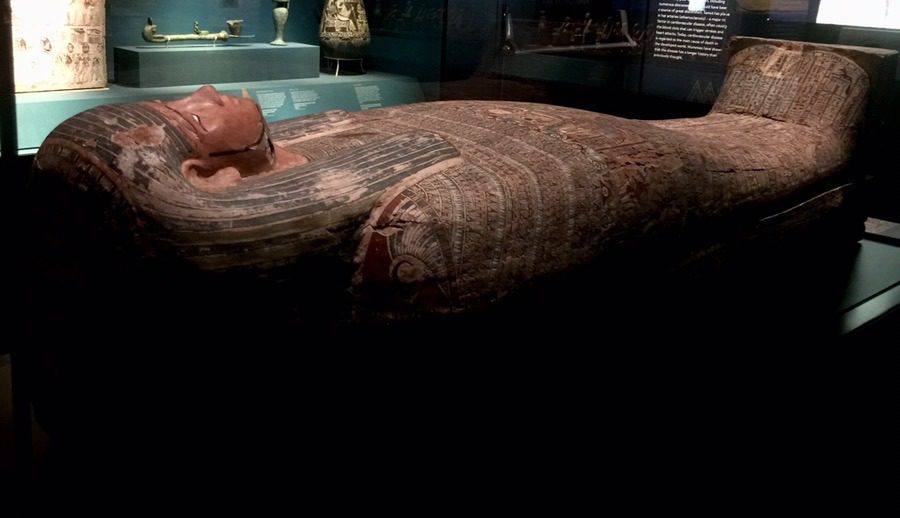 I have always been fascinated by the stories of mummies. Long time ago, I had seen some of the documentaries on how mummies are created and the entire funeral process in Egypt. Sydney’s Powerhouse museum was hosting an exhibition of mummies. When I stumbled upon the event on Facebook, I immediately RSVPed. One of my friends was also interested and hence we booked two tickets online and were all set to visit the exhibition.

A mummy is the body of a living being who has been preserved after death. This practice of preserving bodies were followed in Egypt.

Where is Powerhouse Museum?

The Powerhouse museum is one of Sydney museums, located in Ultimo suburb of Sydney Central Business District (CBD). Opened in the year 1988, the museum is the major branch of the Museum of Applied Arts and Sciences.

Visiting Powerhouse museum is one of the FREE activities that can be done in Sydney.

We arrived at the Powerhouse museum at around 7 PM and collected our pre-paid tickets from the counter. We were given a map and the brochures containing information about the mummies.

There were 6 mummies that were on display. The exhibition was about the lifestyle of these mummies, how they looked and how they lived/died. The scientists at the British museum had recreated all these findings based on an advanced non-invasive techniques.

The first mummy on display was ‘Nestawedjat’ – a married woman from Thebes. There is very little information known to the scientists. Her three coffins arrived to the British museum in the year 1880. The name ‘Nestawedjat’ means ‘the one who belongs to the wedjot eye’ and wedjot was a symbol of protection and healing.

The second mummy on display was ‘Tamut’ – chantress of Amun. Inscriptions on her case identify her as the daughter of a priest of God Amun. Amun is the King of Gods.

The third mummy on display was ‘Irthorru’ – a priest from Akhmim. Irthorru was a priest who served several Gods and probably divided his time between temples. He lived in the town of Akhmim, which is about 200 kilometres north of Thebes.

The fourth mummy on display was of a female Temple singer from Thebes. Her name is not known and identified. Inscriptions on her coffins show that she was a priestess and more precisely a singer of the Interior of Amun. She lived in Thebes around 800 BC.

The fifth mummy on display was of a young 2 year old child. His cartonnage shows that he came from an elite family.

The sixth mummy on display was of a young man from Roman Egypt. An overweight, aged between 17 and 20 years with dark curly hair has been revealed.

The whole exhibit and the insight into the Egyptian culture was definitely intriguing and interesting. This was by far one of the best exhibitions I have ever seen and definitely the best evening I have spent at the museum.

11 thoughts on “Mummified at Powerhouse Museum”