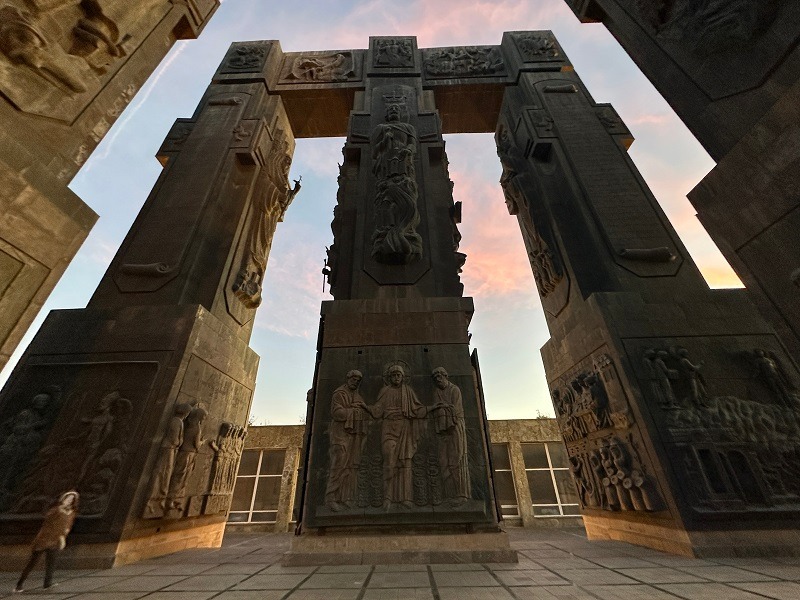 Book your hotel in Tbilisi on Booking.com

Itinerary and things to see on the walk

Built in the 13th century under the reign of King Demetrius II of Georgia, Metekhi church is an orthodox Christian church on the banks of River Kura. The church is dedicated to Virgin Mary and is one of the oldest churches in Tbilisi.

You start your Tbilisi walking tour at Metekhi cathedral.

According to legend, King Vakhtang Gorgasali was once hunting in the region which is now Tbilsi. On his hunting trips, he always took his falcon with him so it could fetch the kill. After he hunted the pheasant, the falcon went to fetch the bird. Tbilisi region is famous for sulphur water. Unfortunately, both the falcon and pheasant fell into the hot sulphur water and died. And hence the name Tbilisi was given to the city where Tbilisi literally translates to warm water.

Known for its beautiful buildings and restaurants, Europe Square is a historical area within the city and close to the old town.

Opened in 2010, the Bridge of Peace is a pedestrian bridge connecting Rike park to the old town of Tbilisi. Designed by the Italian arhcitect Michele De Lucchi, the bridge stretches 150 metres on River Kura.

Built in the 6th century by King Dachi of Iberia, the Anchiskhati Basilica of St Mary is the oldest surviving church of Tbilisi. The basilica is a three span basilica, and was originally dedicated to Virgin Mary. In 1675, the church was then renamed to Anchiskhati, the icon of Ancha.

Even though the initial Sioni Cathedral was built in the 6th century, the current church is based on the 13th century version. Sioni Cathedral is another Georgian Orthodox Christian cathedral that bears the name of Mount Zion at Jerusalem.

According to Georgian culture and custom, the Georgians drink their wine in a horn. And I was informed by the locals that after toasting, the Georgian men drink bottoms up irrespective of how big those horns are. They do not keep their drink down after the toast.

Shardeni street is a busy street with lots of cafes and restaurants, and is famous for its night life. The street is named after a French explorer Jan Chardin who visited Tbilisi in 1863.

Located on the top of Sololaki hill, the Mother of Georgia was erected in 1958 to celebrate Tbilisi’s 1500th anniversary. Also known as Kartlis Deda, the Mother of Georgia symbolises Georgian national character. She holds a bowl of wine in one hand to greet those who come as friends and a sword in the other for the nation’s enemies.

Narikala fortress is an ancient fortress dating back to the 4th century and according to legend, it was built by King Vakhtang I Gorgasali. The complex is also home to St Nicholas church. The original St Nicholas church that dated back to the 13th century was destroyed by fire and hence the new church was built in 1996-1997 to replace the old one.

Built in the 15th century, the Juma mosque at Tbilisi is one of the rare mosques where Sunni and Shia Muslims pray together. The Juma mosque is the only surviving mosque in Tbilisi and is located in the Old town of the city.

Who would have thought that Tbilisi is home to a waterfall too, that is located right in the old town? Leghvtakhevi waterfall is 22 metres tall and is right next to the surphur baths area. The name Leghvtakhevi means fig gorge in Georgian language.

As mentioned earlier, Tbilisi is known for the sulphur water and sulphur baths is one of the main things to do in the city. Chreli Abano Spa is located in the old part of Tbilisi and the building is the oldest sulphur baths and spa from ancient times.

I really enjoyed the Tbilisi walking tour and the landmarks that it passes through. The city of Tbilisi has so much of history and legends associated and it is fascinating to know and see each of these historical landmarks that tell a story.