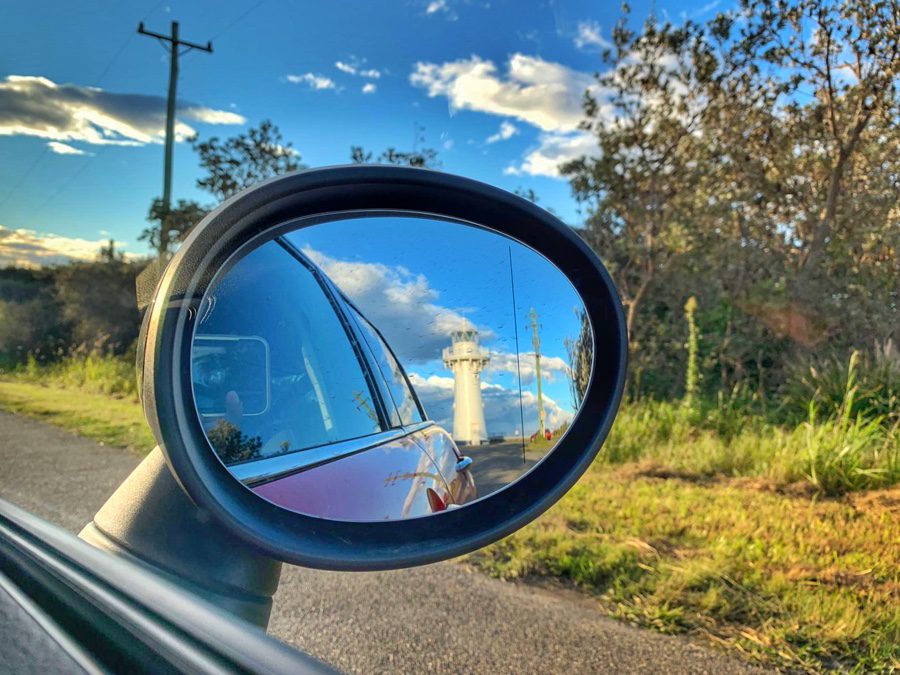 New South Wales has more than 40 lighthouses alone. The lighthouses are historical and some of them are recognised as government listed heritage properties. Out of the 25 lighthouses maintained by Roads and Maritime Services (RMS) on the East coast of Australia, there are around 13 lighthouses in NSW state.

Did you know that I worked in Roads and Maritime Services for more than 2 years and it truly was one of my most favourite places to work during my career?

The complete list of lighthouses in Australia can be found on the Lighthouse of Australia Inc website.

Lighthouses in the South Coast region

The Wollongong Breakwater lighthouse was built in the year 1871. The lighthouse lies is in the Belmore Basin and was designed by Edward Orpen Moriarty. The tower is one of the two towers made of wrought iron on a ferro-concrete base. No longer an active lighthouse, this is now listed as a local government heritage.

The second lighthouse in Wollongong is the Flagstaff Point Lighthouse. Also known as the Wollongong Head lighthouse, this was first lit on 23 July 1937. It is an active lighthouse, overlooking the Tasman sea. The lens used dates back from 1862 and the tower stands 25 metres high.

It is a famous picnic spot among the locals and tourists.

About 99 kilometres drive from Wollongong is the Culburra Beach. Culburra beach, just known as Culburra is a coastal town in the Shoalhaven area. The town is home to the Crookhaven lighthouse.

The Crookhaven Heads lighthouse is an active lighthouse at the entrance of the Shoalhaven River. It was built in the year 1882 and is constructed of timber. There are two view points near the lighthouse and they provide spectacular views of the oceans.

My third stop was Ulladulla. It is about 80 kilometres from Culburra beach. The name Ulladulla is derived from an aboriginal word that means “safe harbour”. Ulladulla is a coastal town famous for its beautiful pristine beaches and sparkling lakes.

The Ulladulla lighthouse, also known as Warden Head lighthouse, was installed at the current location in 1889. The structure is about 40 feet high.

Approximately 130 kilometres from Ulladulla is Narooma. Narooma is one of my most favourite towns in Australia. The name Narooma is derived from an aboriginal word that means “clear blue waters”.

Even though my next lighthouse is a museum, it is one of the beautiful lighthouses. It is in adjacent to the Narooma visitor centre. More details can be found on the Museums and Galleries of NSW website.

The key piece of this lighthouse is the original light from Montague Island Lightstation.

I was really surprised when I heard of my next lighthouse, Cape St George Lighthouse in the Jervis Bay National Park. I was surprised because Australia does not have too many ruins. And this lighthouse is the ruins of a lighthouse. The lighthouse was constructed in 1860 and was functioning till 1889.

Kiama is about 80 kilometres from Jervis Bay and is definitely the most popular and coolest coastal town in NSW. The town is ideal to spend a day over the weekend and makes it a perfect one-day trips from Sydney.

The road trip that covers the above listed lighthouses is worth driving and the views of the coast are stunning. It is a very picturesque route. The distance covered is around 800 kilometres over the span of 2.5 days.

As I mentioned in the beginning, NSW has many more lighthouses. In this road trip, I covered a very few of them and I did miss out some of the others. It does require many more days to visit each one of the lighthouses and explore them.

If you know any of the lighthouses in NSW that is not listed in this post, please leave a comment, so I can go explore them 🙂 .