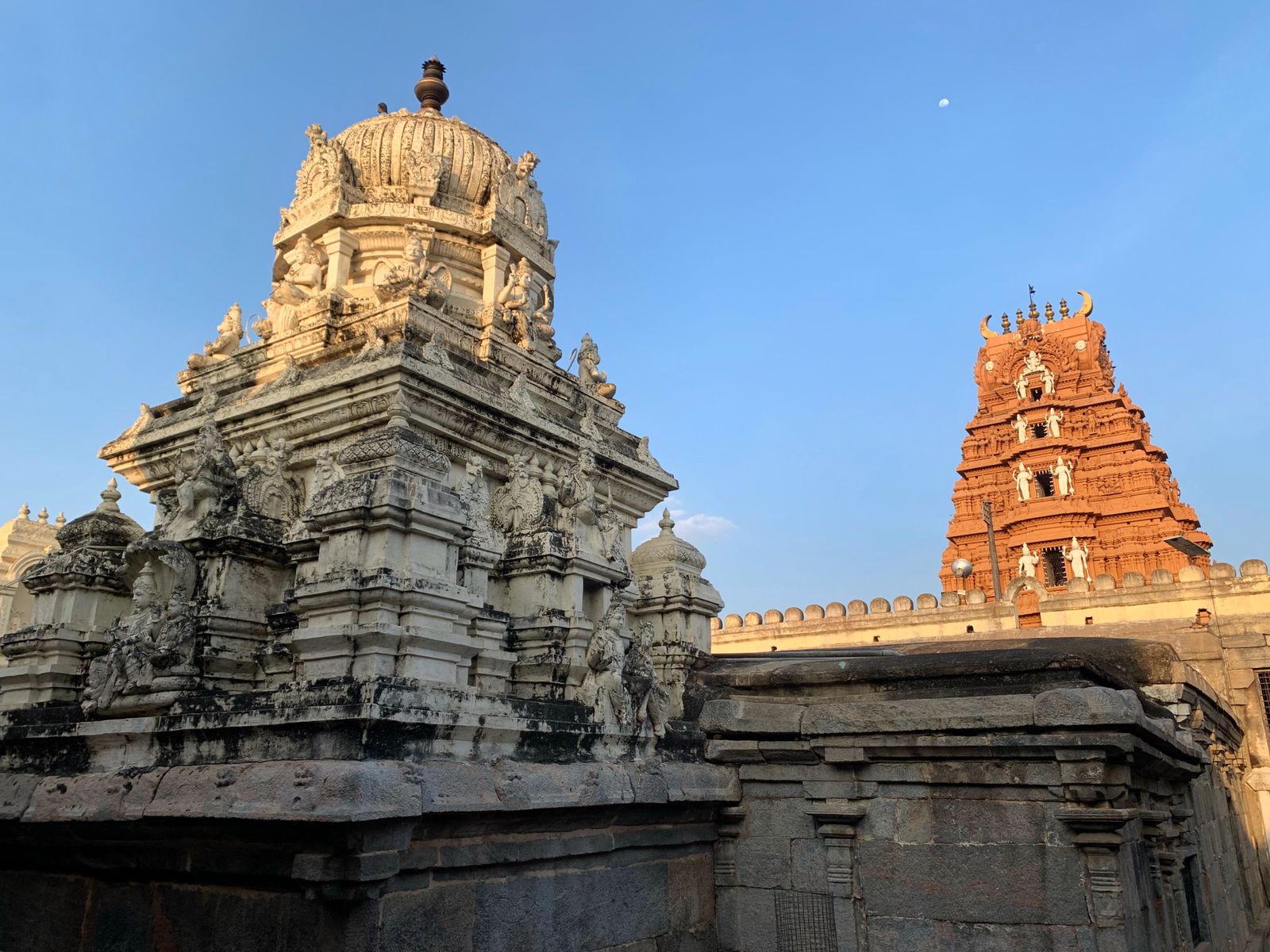 On my way back from Melkote to Bangalore, my taxi driver suggested that I stop over at Sri Aprameya Swamy temple. Just a short deviation from the highway, stood this amazingly beautiful temple with an entrance covered with pink flowers. It is one of those temples that is popular among the locals but not so famous outside the area. As I have been visiting various temples in India and learning about the history and architecture, I decided to spend sometime exploring the beauty.

Built in the 11th century by Chola King Rajendra Simha, the Sri Aprameya Swamy temple is one of the beautiful temples in Mallur village near Channapatna town of Karnataka state in India. The temple is named after the Chola general Aprameya. Also known as Sri Ramaprameya temple, Sri Ambegalu temple and Navneetha Krishna temple, this temple was built on a sandy banks of River Kanva. It is believed that Sage Vyasa did pratishtapna (installation) of baby Krishna here.

The temple is dedicated to Lord Aprameya which is in a standing position with a Shanka – Chakra in upper hands and Padma – Gadha in lower hands. It is believed that Sri Rama had stayed here for many years. He worshiped Lord Aprameya and conducted homas and yagnas. This temple is also called as South Ayodhya.

The main feature of the temple is the sanctum dedicated to Bala Krishna (baby Krishna) in a crawling posture carrying butter in one hand. It is believed that this is one of the rare temples where Krishna is in his baby form. The idol can be seen without any decorations (in Kannada language alankara). According to locals, any childless couple who prays to baby Krishna will soon be blessed with baby. And after the child is born, the couple visits the temple again and thank the lord by hanging a silver or wooden cradle in the sanctum.

The temple is a very ancient temple constructed in the Dravidian architecture style and it is facing east with a 5 tier Rajagopuram.

Did you know that Sri Cheluvanarayana Swamy temple in Melkote is also built in the Dravidian architectural style?

How to get to Sri Aprameya Swamy temple?

Sri Aprameya Swamy temple is surely one of the beautiful temples in Karnataka. It has many deities inside and the vibes of the temple is truly mesmerising. The temple makes a perfect stop over on the way between Bangalore and Mysore. I also suggest spending sometime looking around at the wooden toys made by the local artists in Channpatna.

Have you visited Sri Aprameya Swamy temple? Let me know in the comments below.

9 thoughts on “Sri Aprameya Swamy temple, one of the rare temples of Bala Krishna”