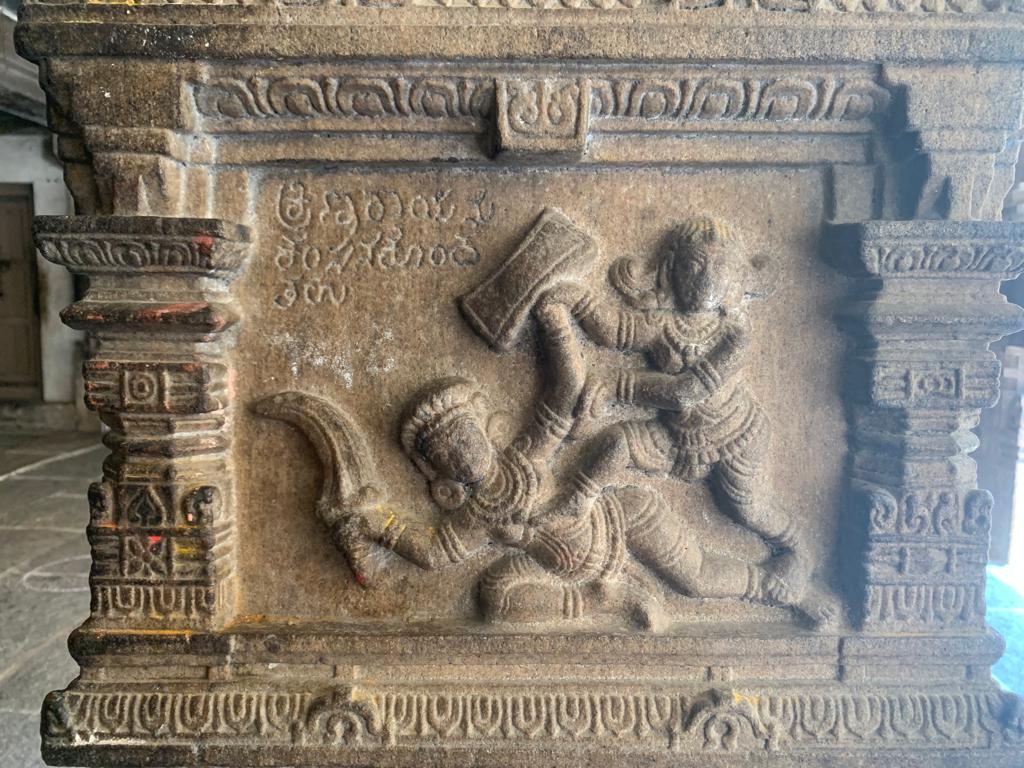 Melkote is a religious town that has some of the very beautiful temples of Karnataka. It is just around 150 kilometres from Bangalore and hence makes a perfect one day trip. Sri Cheluvanarayana Swamy temple is one of the main temples of Melkote town.

I always wanted to go to Melkote but unfortunately every time I planned, something came up and I never ended up going. But a few weeks ago, I decided to go on a one day trip to cover Sri Cheluvanarayana Swamy temple and a few other places that Melkote has to offer.

Built in the Dravidian architecture style, the temple is decorated with beautiful pillars and carvings. It also features a dome like top with detailed sculptures of gods and goddesses.

The temple has inscriptions written in Old Kannada indicating that the temple is around 1000 years old and that the deity was known as Ramapriya. One of the columns that have the inscriptions also mention the name of Raja Wodeyar, belonging to the Wodeyar dynasty. The Wodeyar dynasty ruled Mysore between 1399 and 1947 and is the only royal family who have ruled a kingdom for more than 500 years. It is recorded that the temple’s most valuable jewels including the two crowns, Vairamudi or Vajramukuta, and Krishnaraja-mudi were gifted by Mysore King Raja Wodeyar.

Vairamudi Brahmotsava is an annual festival in Melkote. Vairamudi, also known as Vajramukuta, is a crown decorated with diamonds. The festival or brahmotsava is held for 13 days, during the summer months of March or April, where the deity is decorated with the legendary diamond studded crown and is taken on a procession around the Melkote town. It is usually held either on the 3rd or 4th day of the festival.

The procession is a night long event as it is believed by the locals that the crown must not be exposed during the day to sunlight. There is also a tradition that even the head priest cannot look at the crown with naked eyes till it is fitted on the Lord and the hence the priest covers his eyes with a piece of cloth while fitting the crown.

Note: I have referred the priest as “he and his” because unfortunately in Karnataka we only have male priests for some reason.

How to get to the temple?

Sri Cheluvanaraya Swamy temple is located in the Melkote town of Karnataka state. Melkote is around 150 kilometres from Bangalore city.

Sri Cheluvanarayana Swamy temple is undoubtedly one of the most beautiful temples I have seen in Karnataka. The architecture of the temple is mesmerising. I absolutely loved visiting this beautiful temple and the town of Melkote and I highly recommend anyone visiting Karnataka to definitely spend a day at Melkote.

Have you been to Sri Cheluvanarayana Swamy temple? How did you find it? Let me know in the comments section below.