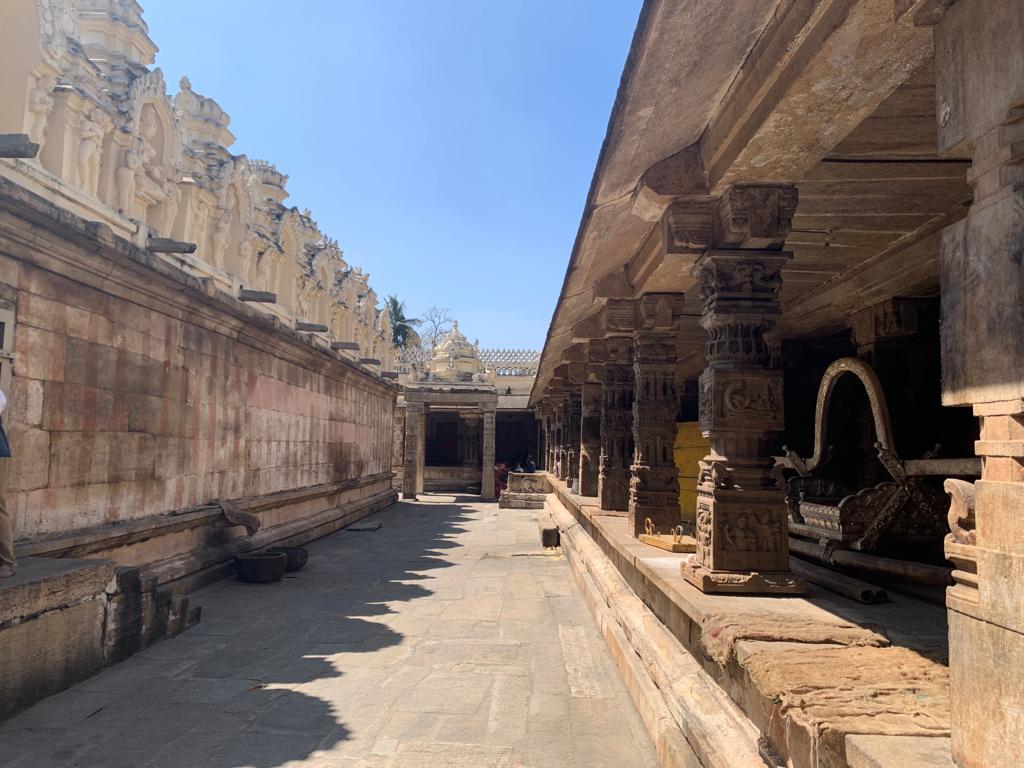 Melkote has always been on my bucket list for Karnataka. I had heard so much about the beautiful temples in the area but unfortunately, every time I planned, something came up and I never ended up going. But this time around, I was adamant and I planned for a one day trip from Bangalore to Melkote with a friend. We started from Bangalore very early to reach Melkote just before noon and we had plenty of time to explore and see all the things that Melkote can offer.

Also known as Thirunarayanapuram, Melkote is a small religious town in Mandya district of Karnataka state. The name is derived from the fort that is on the hill and Melkote in Kannada literally means fort on a hill.

Melkote hosts an annual spiritual event Vairamudi Brahmotsava. The main event is the procession of the God Cheluvanarayana Swamy through the streets of Melkote. During the procession, the idol of the god is carried on top of a golden garuda, along with his wives Sridevi and Bhudevi. The festival is named after the diamond studded crown, which is donned by the god during the procession and it is called the Vaira Mudi.

According to local legend, Vaira Mudi was stolen from Lord Narayana, an avatar of Lord Vishnu, when he was asleep by Virochana, who was the king of demons and the son of Prahalada. Garuda was requested to bring back the crown. Garuda fought with Virochana and won the diamond studded crown. While bringing the crown, a blue stone was lost and it fell near Nachair Koil, a temple town in Thanjavur district of Tamil Nadu state. It is believed that the gem turned into a stream called Manimuttaru. On his way, Garuda saw Bala Krishna playing with his friends in the mid sun. To protect Bala Krishna from the rays of the sun, Garuda spread his wings to create a shade and placed the crown on Krishna’s head. The locals claim that the crown was then presented to Lord Cheluva Narayana.

Did you know that Channapatna has one of the rare temples, dedicated to Bala Krishna, called Sri Aprameya Swamy temple?

How to get to Melkote?

4 places to see in Melkote

Note: Melkote is popular for tamarind chutney (puliogre) that is mixed with rice before consuming.

One of the main temples of Melkote is the Sree Yoga Narasimha temple which is on the hill. Dedicated to Lord Yoga Narasimha, the temple is an ancient temple that is believed to have been built about 1000 years ago. Yoga Narasimha is a man-lion incarnation of Lord Vishnu. The temple is very beautiful and has stunning architecture.

Kalyani is a water tank that is usually built with the temples. The Melkote Kalyani is around 1000 years old and is the largest of the 108 kalyanis in the district. According to legend, Lord Krishna took on an avatar of Lord Varaha and when he lifted the earth from the universal ocean, few drops of water from his body fell on top of a hill at Melkote to form the kalyani.

Melkote has a mantapa which is very popular among the photographers. Mantapa is a pillared hall used for Hindu rituals. The architecture of the mantapa is stunning. No matter what you miss, definitely do not miss the mantapa.

Built by Hoysala King Vishnuvardhana, the Raya Gopura is an incomplete temple. The temple has four raised pillars with amazing structures and carvings. It is believed to have been built overnight. There are a few steps to get to the Raya Gopura.

Melkote is very safe for solo female travelers. As it is a religious place, people usually are god fearing and mind their own business. But be careful of the monkeys there. Also, like any other place, be cautious and know your surroundings, especially at night.

If you love history, temples and architecture, then Melkote must surely be on your list of places to visit. The sacred town is extremely beautiful and a lovely place to go back in time. A trip to Melkote can easily be done as a one day trip from Bangalore. I absolutely adored the place and I would love to go back again.