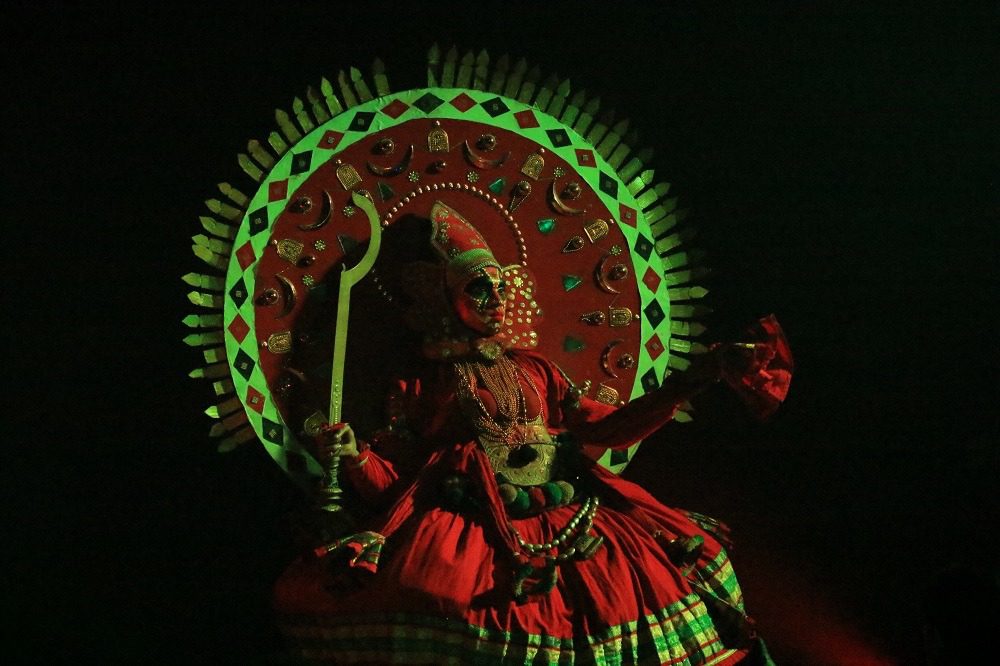 When we think of a dance form of Kerala, we always think of Kathakali and not Theyyam. But did you know that Theyyam has a long history in Kerala and is one of the ritual dance forms? It is as vibrant as Kathakali and has many stories to tell. It consists of thousand year old traditions that have been passed on through generations. And the dancers perform with beautiful costumes and folk music. I had an opportunity to watch this dance form live when I was on a Pre-Mart tour 2022, in collaboration with Kerala Travel Mart and Kerala Tourism.

Also known as Teyyam, Theyam and Theyyattam, Theyyam is Kerala’s ritual dance form that consists of thousands of years of traditions, customs and rituals. The locals of Kerala consider Theyyam as a channel to god and seek blessings from Theyyam. Theyyam means God in Malayalam.

The performance of Theyyam consists of dance, cultural drama and expression, vocal recitations, peculiar makeup, costumes and music, and is generally performed in front of a village shrine. These performances last for 12 to 24 hours with intervals.

Theyyam has been referenced in many old literatures and historical documents such as Keralolpathi and Sangam. It is believed that Parashurama, the sixth incarnation of Lord Vishnu granted the land of Kerala some of the festivals such as Kaliyattam, Puravela, Daivattam and Theyyattam. Theyyam originated from Kaliyattam which lasts for 3 to 11 days and the indigenous tribal people were given the responsibility of performing the Theyyam dance form.

The Sangam literature talks about Velan, one of the Theyyam dancers, who was employed by the mothers of love rejected girls to drive out the malignant spirits from their daughters. There are also evidences that prove that Theyyam may have originated during the earliest period of Neolithic, Chalcolithic settlement and expression.

Out of 400 Theyyams, among 112 are the most famous ones and are performed even today at various shrines and festivals. Some of the famous types are:

Where to see Theyyam in Munnar?

Theyyam is usually performed in North Kerala, especially in Kannur and Kasargod districts. But some of the traditional and cultural performances in the other parts of Kerala also include Theyyam performances and I was fortunate to see a live performance in Munnar.

The best place to see Theyyam performance is at Punarjani traditional village in Munnar, around 7 kilometres from the town. There is a daily show at 5 PM where visitors can enjoy the fusion of Kathakali, Bharatanatyam and Theyyam. The ticket prices vary based on the classes such as Platinum, Gold and Silver and they usually range between INR 500 and INR 300 per person. You can purchase tickets at the entrance of the theatre.

How to get to Munnar?

Munnar is a hill station in Idukki district of Kerala. At an altitude of 1600 metres, Munnar is a town in the Western Ghats mountain range of India. The town is called the Kashmir of South India and is a popular destination.

Theyyam is surely one of the most amazing dance forms of India and I highly suggest seeing it as a live performance at least once. It is absolutely beautiful and is totally worth spending time watching it. If you are a dance or an art form lover, then the Theyyam performances are surely for you. Have you watched Theyyam? Let me know how you found it in the comments below.

I was hosted by Kerala Travel Mart 2022 and partnering hotels and resorts as a media invitee. I did this activity or stayed at the resort as part of their Pre-Mart tour and I thank them for the hospitality. However, all the opinions mentioned in the post are solely mine and unbiased. The information mentioned is based on the inputs provided from various sources and on my personal experience.