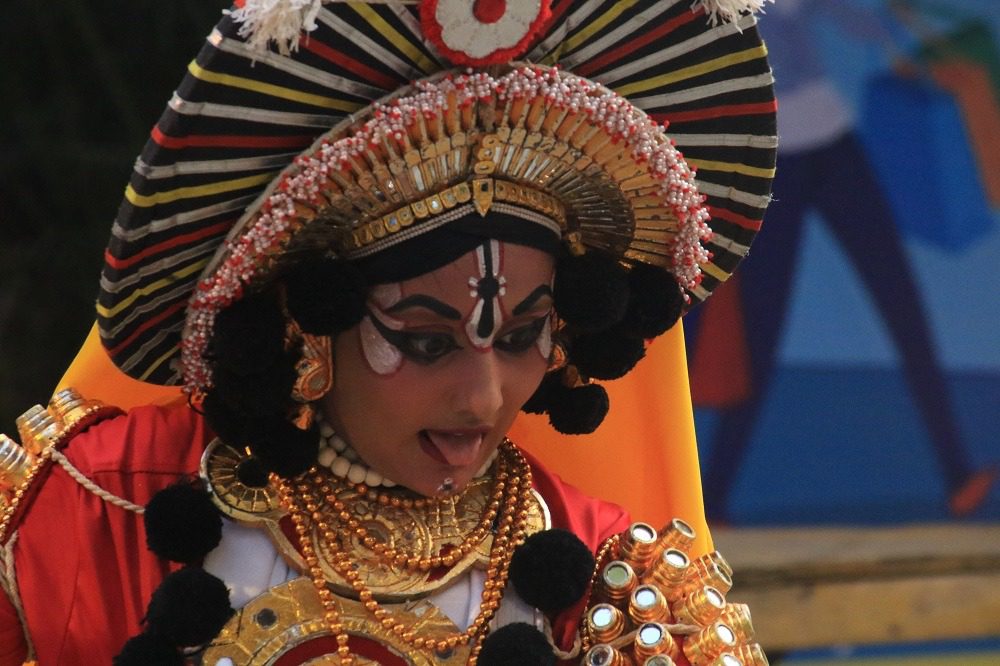 Do you love cultural dance forms and art? Do you cherish the old forms of dance and drama? Then Yakshagana, a traditional dance form from Karnataka state of India must surely be on your list. It is a dance form that mixes dance and theatre. In this post, I would like to introduce you to Yakshagana and also list out the places where you can visit and see the live performances of Yakshagana.

Seeing a live performance of Yakshagana was always on my bucket list. It was such a shame that even though Karnataka is my birth state, I had never seen Karnataka’s dance form even once. So, when I read in the newspaper that there was a Yakshagana performance at Karnataka Chitra Kala Parishad, I immediately RSVP’d and planned for my visit.

Yakshagana is a combination of dance and drama unique to Karnataka, especially Coastal Karnataka. It is a traditional folk dance with dramatic costumes and make-up, music, dance and dialogues.

Known with various names such as Aata (meaning play in Kannada), Thenku Thittu or Badaga Thittu, Yakshagana is usually performed either for the entire day from dusk to dawn or is a night long event. It is performed in open air theatres or at the temples. In recent times, the performances have been reduced to about 3 hours.

Yakshagana was first introduced in Udupi by Naraharitirtha, the minister of Kalinga Kingdom and a disciple of Madhvacharya. It is believed that it was first originated somewhere between the period of 11th and 16th centuries C.E.

However, the first written evidence of Yakshagana dates back to 1556 C.E and is found on an inscription at the Lakshminarayana Temple in Kurugodu of Bellary District. Another piece of evidence is inscribed on a palm leaf found at Brahmavara formerly known as Ajapura. It is in a form of a poem written by Ajapura Vishnu.

Yakshagana in its current form has a lot of influence of how the art was during the Bhakti movement. There were new compositions added and it gave birth to tent performances and became a ticketed event. Today, there are many variants and sub-genres of Yakshagana.

Yakshagana performance is an act by a team of artists. A typical team consists of about 15 to 20 artists. Traditionally, it consisted of only men artists but now even women are part of the team.

The music is based on the ragas and each performance depicts a story and the acting is categorised as method acting. The acts are derived from mythological stories such as Ramayana and Mahabharata. Artists also perform the acts from other epic stories and of Hindu gods such as Lord Ganesha and Goddess Chamundeshwari. The performances start and end with an act praying to Lord Ganesha.

Did you know that in the early 20th century Yakshagana was taught at schools in Karnataka to ensure the children learned about the mythological stories and puranas?

Yakshagana has some very important components that all blend together to create a beautiful play.

Yakshagana is very famous in the coastal region of Karnataka. Places like Udupi, South Canara and North Canara have regular performances. Recently, Bangalore has been showcasing these performances as well, especially at cultural fairs.

The best places to known where and when these performances occur are:

Yakshagana is surely one of the best traditional dance forms in India. It is so dramatic and an absolute delight to watch the artists perform to various scenes from the epic and mythological stories. I had such an amazing time watching the artists narrate and tell different stories that I had heard from my parents while growing up.

Have you watched Yakshagana? Where did you watch it? Let me know in the comments below.