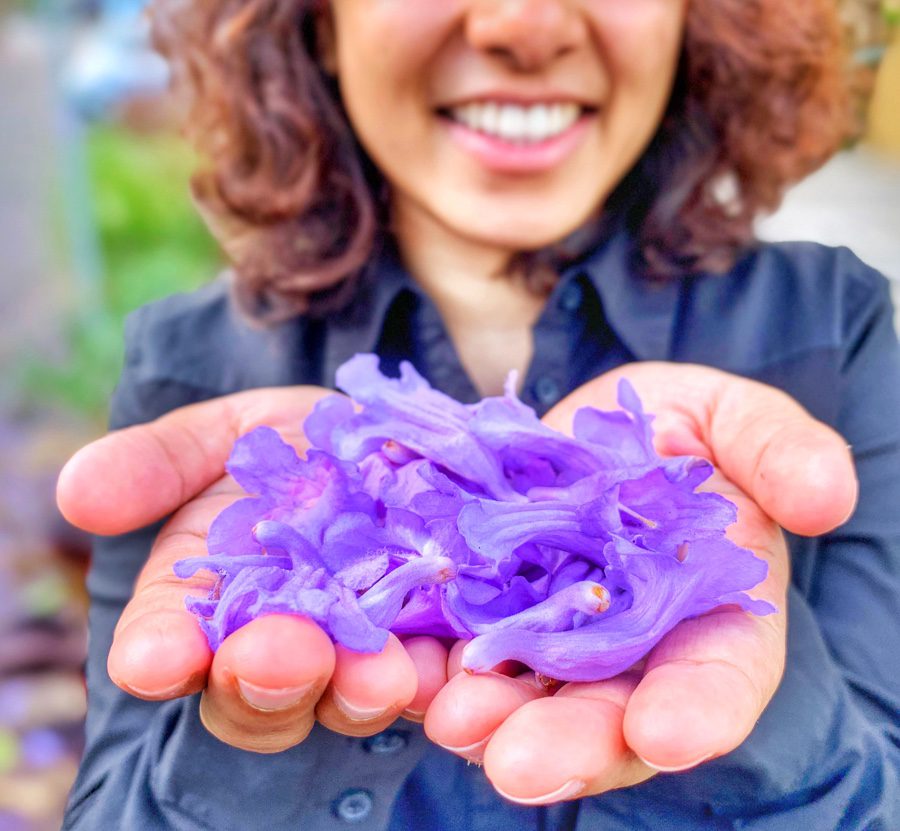 Welcome to my most favourite season of the year! It is the Jacarandas season in Sydney. A season where everything is pretty and purple/lavender. I have been going to different places in Sydney, over the years, to see the Jacaranda flowers and to take pictures with them.

Sydney turns purple during the end of Spring/beginning of Summer seasons. It is the Jacarandas season and the streets of Sydney, especially on the northern side, are purple. The season starts from the end of October and lasts till December every year.

The lifespan of Jacaranda trees is 50 years. But I believe there are some of them that have lasted for up to 200 years.

There is an interesting story behind how Jacarandas became so special in Sydney and how did it earn its place. The story goes that many years ago a hospital in the North Shore distributed Jacaranda seedlings to the new mothers encouraging them to plant them. This was a way to see the plant grow along with their child. And hence the result of so many Jacaranda trees on the northern side of Sydney.

This is supposedly just an urban myth as there are no records of the seedlings being given to the new mothers. Even if it is just a myth, I would definitely comment that it is a very pretty myth and it helped in making Sydney so mesmerising during this time of the year.

For more information on how the plants were introduced in Sydney, refer this article on Daily Telegraph.

Did you know that the Jacaranda trees have a vigorous deep root system?

A Jacaranda tree is a sub-tropical tree with attractive indigo flowers. They thrive in tropical and warmer climatic conditions. Jacarandas are not Australian but are native South American trees. The Jacaranda seedlings were planted all around the globe because of their beauty.

Did you know that Pretoria in South Africa is home to almost 70000 Jacarandas and have been named as the Jacaranda city?

The Jacarandas represent wisdom, rebirth, wealth, and good luck. The legend says that if the flower falls on your head, then it is a good fortune for you. And the name Jacaranda has a Guarani origin, which means fragrant.

Even though Jacarandas are extremely pretty, some people consider it as a pest as the flowers are sticky and they stick to the cars, streets, and driveway. The stickiness is caused by aphids. Aphids are caused when insects extract the sugar content from the flowers and leave sticky droppings called honeydew.

It can take anywhere between seven to fourteen years for Jacaranda flowers to bloom.

Best places to go view the Jacarandas in Sydney

The McDougall Street in Kirribilli, North Sydney is home to the Jacaranda Tree Tunnel. The entire street is filled with Jacaranda trees and is one of the very famous Instagram streets in Sydney.

The McDougall Street is a hotspot during the Jacarandas season.

Note: Be careful of the ongoing vehicles.

Sydney’s first Jacaranda tree was planted in the Royal Botanical Garden in the late 1850s or early 1860s. So one of the best places to find the Jacarandas in Sydney is where it was first planted.

The best place to find Jacarandas in Lavender Bay is Wendy’s Secret Garden.

The Paddington Reservoir Gardens on Oxford street and Vanclause House in Paddington are other great spots to see the Jacaranda trees. Paddington is a busy and lively area in the Sydney Central Business District (CBD).

For other places where Jacaranda trees are found in Sydney, refer to the Urban list’s article.

We love our Jacaranda flowers so much that Sydney hosts an annual Jacaranda festival, between November 22 and 24, to celebrate the season. It is a festival where people celebrate with live music, afternoon and night markets, and when the sun goes down the trees are lit up that make a spectacular sight. More information can be found on the Jacaranda Festival website – https://jacarandafestival.com/.

Yes, Sydney, especially the North Shore, is very safe for travelers including the solo female travelers. I have been living here for many years now and I have not faced any issues. And I have traveled in Sydney alone many times. Sydney is traveler friendly and has all the facilities required. However, like any other place, I would be cautious especially at nights, and would always trust my instinct.

Be careful of the ongoing traffic and vehicles when on the streets.

It is totally worth chasing these streets and places around Sydney to get a glimpse of this beauty. The Jacarandas are spectacular and make amazing photographs. If you love these purple flowers, then you will definitely love the Cherry Blossom season in Sydney too.

14 thoughts on “Best places to find Jacarandas in Sydney”