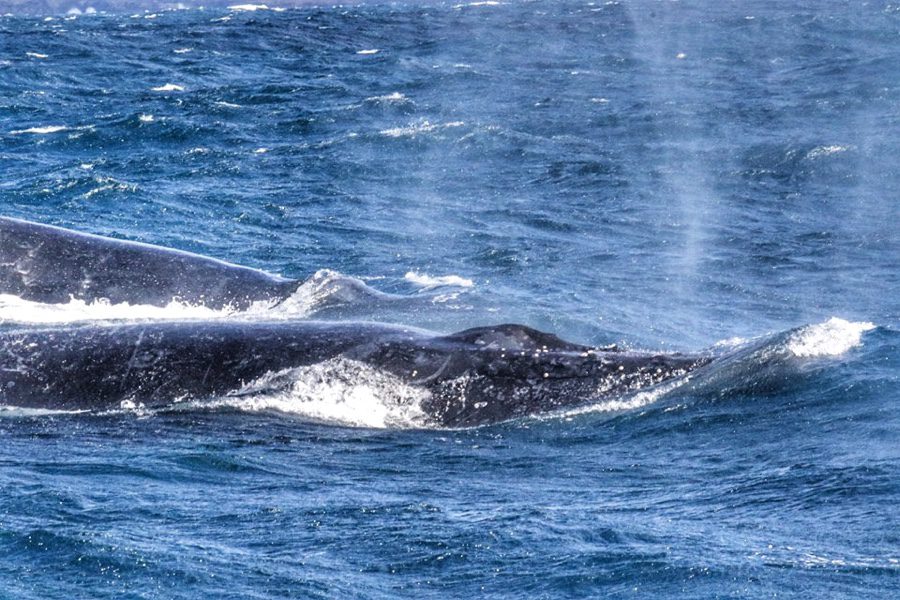 As a yearly routine in Sydney, I go for a whale watching tour every single year. I have always loved the whales and I like to go up close (well, as much as I can) to go see them in their natural habitat. The whale watching can be done by boat or from the mainland in Sydney during the whale migratory season.

Did you know that there are around 45 species of whales? The most common type of whales that can be seen in Australia are the Humpback whales.

Whale migration happens between the months of May and November in Australia. In the first part of the season, the humpback whales including the pregnant whales are heading from the south (Antarctica) to the north (Queensland). And in the second part of the season, the whales along with their calves head back from the north (Queensland) to the south (Antarctica) again. They do this every single year to escape from the harsh cold waters. They migrate to warmer waters in Queensland where the pregnant whales give birth to their calves. The types of whales we generally see near Sydney are the Humpback whales.

Even though the whales migrate between the months of May and November, the best time to view them is during June and July.

Did you know that a whale can migrate up to 5000 kilometres? How cool is that?

Where can I spot whales?

The whale watching tour costs money and the bookings have to be made in advance. The tour generally lasts for 2.5 to 3 hours and they operate in the morning and afternoon. It does not matter at what time there are more chances as the whales can be seen throughout the day. But I like to go in the morning so I can finish the tour at lunchtime.

In Sydney, the tours depart from either Circular Quay or Darling Harbour.

Did you know that the tour operators have to abide by the law and need to maintain a distance of 100 yards from the whales? The whales can come closer and generally that happens as the whales are extremely curious.

How much does the whale watching tour cost?

Over the years I have figured out that there are always deals on Groupon for whale watching. Without the deals, the 3-4 hours of boat tour costs around AUD 80. But with the deals, the same tour costs somewhere between AUD 35 to AUD 40.

I went with the tour operator Go Whale Watching in 2019 and I must say they were very good. The skipper was very organised and the entire staff on the boat were freindly.

There are plenty of places where whales can be seen from the coast. I always suggest going on a coastal walk where one can have better chances to see the whales. Watching the whales from the main land is absolutely FREE.

Some of the walks that I can recommend are:

One walk that I can vouch for and a place where I personally saw the whales is in the Bouddi National Park. I was on the cliff for around 30 minutes and I saw at least 8 whales.

How to spot whales?

Look out for a blow on the surface. The whales blow out air/water that creates a fountain (type) in the air. If you see that, then definitely it is a whale.

In 2019, the whale watching tour was very special for me. I have never cried emotionally before even though I have seen some spectacular things in life. But this time when I saw the two whales swimming so closely near the boat, I cried. I cried with joy and was so emotional. This is definitely a first for me as I have never cried watching wildlife before. The whole experience was thrilling and beautiful and I will always remember this in my life.

And they are back!

Yes, they are back! Yet again! My most favourite part of winter – the Humpback Whales <3. Starting from mid-May till mid-October is the official whale season. And I couldn’t have resisted staying home or delaying my trip to watch my favourite mammals. This is the first trip with the many more to come this year.

I took the tour with Harbour Cat Sydney this time. The cost of the tour was around AUD 39 (discounted price) which was for 3 hours, in an open small party boat. The tour also included the afternoon tea. Our guide/instructor Colin was amazing. We headed towards the ocean straight after boarding. We saw a beautiful magnificent humpback. Colin mentioned the whale was a she and she was pregnant.

Yes, this time around the pregnant whales travel up north towards the Great Barrier Reef to give babies in the warmer regions. Once given birth, they travel down the south with their calves. I personally love watching the calves. They are curious and they breach more often than the mothers.

Anyway the pregnant whale we saw during our tour, did breach. But she breached only once and unfortunately, my camera was not fast enough to capture the breach. Then Colin headed further more into the ocean where we saw two more whales. They surfaced, blew some air, and went back down. It was spectacular. I love them.

I had posted a picture on Instagram a while ago about my whale watching experience:

“I don’t care what anyone thinks of me.

And I really meant it. I definitely want the whales to like me because I like them that much. And this is the reason why I go for whale watching every single year at least once without a miss (even though this year it was almost a broken ritual – but my friend Vijay ensured I didn’t and I am thankful!).

The whale watching starts every year from the month of May and lasts till November. This is one of the amazing attractions in Sydney. I went on the tours twice this year as part of my yearly visit. The tours were with two different tour companies.

I loved the Thunder Jet boat tour. The jet boat is a small boat and the tour company ensures that the passengers see some whales during the tour. And for me, this was the first time I had come up close to these gentle giants.

Some of my pictures from this year’s (2016) whale watching tours:

It was whale season again! Every year, hump back whales migrate from Southern part of Australia to Northern part between April and August. This is known as Northern migration. And every year I do not miss a chance of going on a tour and watching them.

I have taken many whale watching tours from the past three years. I find Captain Cook Cruises to be the best of all. They ensure everyone on board have the best experience. And the booking process is quite easy as well.

My first whale watching tour this season was on 13 June 2015. And I think that was by far one of the best experiences I have had.

After about an hour or hour and a half piloting into the ocean, we had spotted a young juvenile (about 2 years old – well, that’s what our captain said) who put up quite a show. He had breached continuously for 1 hour to 1.5 hours (Can you believe that!)

Some pictures that I had captured of the drama:

One special incident that I will remember for long and which is very close to my heart:

As I have seen many whales, this one time was very special. It was a very close interaction with the whale. This juvenile was breaching for an hour of so. All of us on the tour were standing at the left edge of the deck, watching him breach, and clicking so many pictures (Shutter sounds all around – Click, click and click).

Suddenly, the young whale decided to go inside the water, swimming towards our boat. He swam from the left to the right side, just below our boat. While he swam under our boat, all of us who were watching him, followed him and ran to the right edge of the deck, to see him come up, emerging out of the water from the right side. So basically he went down the boat from the left, and came up on the right. All this without actually touching our boat. It was an absolute spectacle.
He was huge and beautiful and the boat had not come any closer to his size (Trust me ?).

Oh my God! I had never seen anything like that before. I must have been blessed and very lucky that day to have witnessed this magnificent and grand show.

I really wish I had taken a video of this whole incident. But I was too overwhelmed to even take a good picture.

When we were returning back to the Wharf, Captain Cook Cruises had announced a challenge – “Whoever had clicked the good pictures of the whale breaching would receive a free ticket for a whale watching tour.”

And guess what? I received a free ticket.

“Willie” got his name after “Willy”

Whale Watching Tour – It was our Willie’s birthday on 9 August 2015. He would have turned 6 years.

As I am a wildlife lover, I strongly recommend going on a whale watching tour to see these beautiful gentle giants. Go out there and Happy Whale Watching!

If you have seen whales, then I would love to hear. Please drop a comment or write to me on Raksha.Nagaraj@Solopassport.com or Solopassport@gmail.com.

14 thoughts on “Whale watching in Sydney”