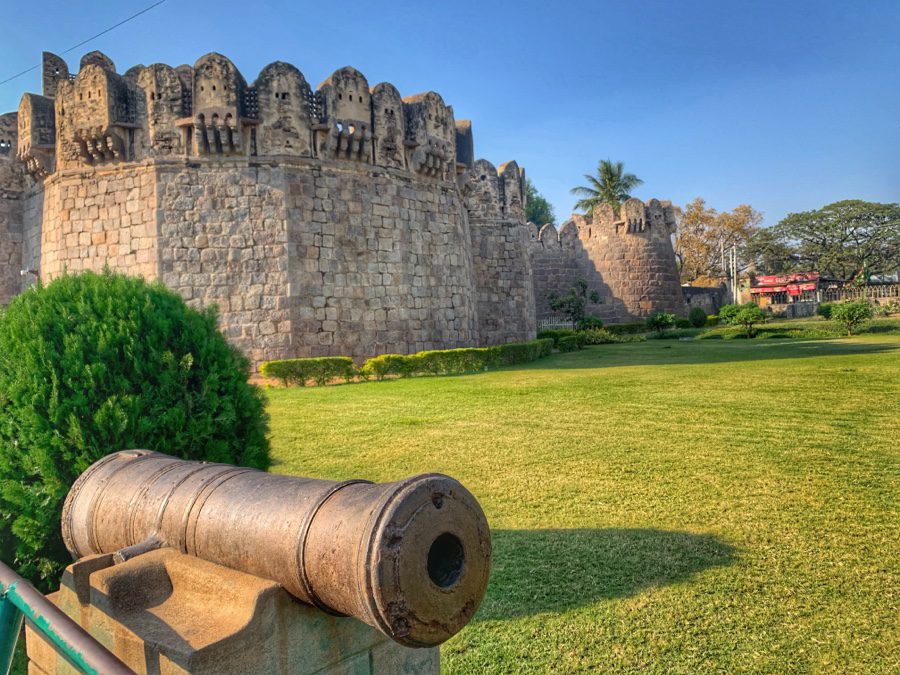 Are you one of those who like visiting historical places and forts like me? I am a big fan of revisiting and living the history and also love in knowing the interesting stories that history come along. If this is true then definitely, the Golconda Fort is for you. After traveling in Hyderabad for a day, I realised that the Golconda Fort is the number one thing to do in Hyderabad.

Did you know that there are three towns in the USA that are named after Golconda Fort?

Golconda Fort, which means Round shaped hill, is a fort in Hyderabad. It is one of the most prominent structures/landmarks in Hyderabad. The fort is a fortified citadel and was an early capital city of the Qutb Shahi dynasty.

Originally known as Mankal, this fort was the capital of the medieval sultanate of the Qutb Shahi dynasty. The region was famous for its mines and the mines have produced some of the World’s renounced diamonds – Koh-i-Noor, Hope diamond, Nassak Diamond, and Noor-ul-Ain. The fortress city within the walls was famous for the diamond trades.

The fort was originally known as Mankal.

The fort went through a lot of changes and was built and structured by many dynasties and rulers. It was first built by the Kakatiyas. Then the fort was rebuilt by Rani Rudrama Devi and her successor Prataparudra. After this, the fort came under the control of the Kamma Nayakas.

The Sultan Quli Qutb-ul-Mulk then established the Qutb Shahi dynasty in Golconda.

The fort was initially a mud fort which was later then expanded and rebuilt.

The Qutb Shahi dynasty was founded by Sultan Quli Qutb-ul-Mulk and was a territory in South India. It was established in the 16th century. The history states that the rulers of the Qutb Shahi dynasty were great builders and patrons of learning. Their works include Char Minar. The ruler’s courts became Persian culture and literature.

How to reach Golconda Fort?

The fort is about 11 kilometres from Hyderabad city. The fort is accessible by road. However, there is a bus (public transport) that goes to the fort.

The whole fort stretches for about 11 kilometres. It has four distinct forts, many entrances, and gates. It is an architectural beauty and I would say even spending one whole day at the fort is less.

Entrance fee – There is an entrance fee to go inside the fort. The entrance ticket must be purchased at the main gate and the cost of the entrance to the fort is INR 25 for Indians and INR 200 for Foreigners.

More details can be found on Hyderabad Tourism website.

The fort has Mahankali temple at the top.

My guide Mohammad Gafoor was really good. I met him at the entrance of the fort. He took me around the fort for a couple of hours and gave a very good insight into history. There were so many facts and stories that he talked about. He was confident and very knowledgeable. And more importantly, he took really good pictures, which becomes important when you are traveling alone.

The guide charges are around INR 500 for 30 minutes of the tour. This may be higher for the foreign nationals. Ensure to check the chart that the guide have as it has the government prescribed charges.

I loved everything about this fort and I wish I had more time there. I found it very interesting the way the fort was constructed and the way every aspect was thought about when they were constructing this fort. The natural air conditioner, markets, the sound that echoes from the entrance, absolutely every detail, and every corner was a marvel. This surely is one of the most beautiful and historical places I have visited and I will definitely visit this place again.

I will be honest and say that if traveling in Hyderabad alone then precautions have to be taken. It was relatively safe and alright for a solo female traveler.

Even though I did not have too much trouble, but I still had some issues with my taxi driver. For some reason, after I hailed his taxi where he had agreed he would take me to the fort, he changed his words and he did not want to take me to the fort. I had to argue with him for sometime after which he reluctantly agreed and took me to this fort. So, yes I would definitely be a bit careful while traveling in Hyderabad. Other than this incident, I did not face too many problems.

However, there would be locals who would try to talk and act funny. Be careful of these people and just be mindful around the surroundings.

This fort was definitely worth the visit. It has so many things to explore and discover. And I definitely recommend taking a guide so you can listen to the most intriguing stories from the fort.

If you know anything that is interesting about this fort which I have missed, please do leave a comment or write to me on Solopassport@gmail.com.