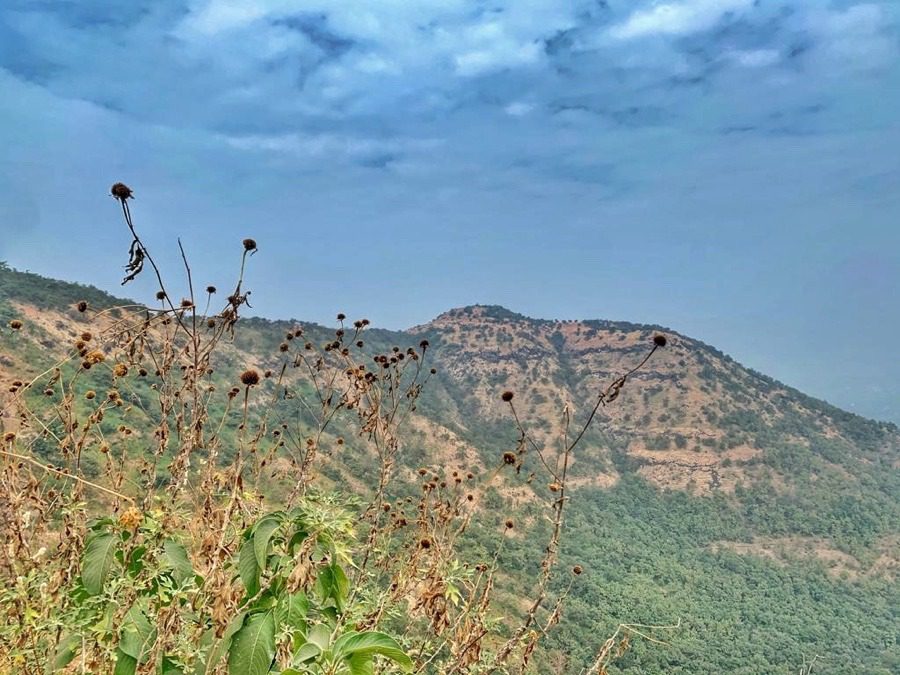 Sinhagad Fort was a suggestion from a friend who resides in the Pune city. My friend told me about this hike and assured that I would love it. And as my friend mentioned, the hike to the Fort definitely did not disappoint me. The trail is challenging, the views are spectacular and the fort is amazing. The fort provides a sneak peek into the history of the Maratha Empire.

Sinhagad Fort, previously known as Kondhana, is a fort in the Pune city. It is located on an isolated cliff in the Sahyadri mountains. The fort has witnessed and fought many battles and the well known one is the Battle of Sinhagad in the year 1670.

The Battle of Sinhagad was fought by Tanaji Malusare, general of the Maratha Empire to recapture the fort. Sinhagad was the first fort that was re-captured from the Mughals. Unfortunately, Tanaji was killed in the fight but the fort was won.

The fort was renamed to Sinhagad meaning Lion’s fort and reference of lion was made after Tanaji.

Based on some of the information available and found, it is suggested that the Sinhagad Fort was built around 2000 years ago.

The Sinhagad Fort has a memorial of Tanaji and a tomb of Rajaram.

The best time to visit the Sinhagad Fort is during the winter (November, December and January), spring (February and March) and autumn (September and October) seasons. The summer season (April and May) is extremely hot and the rainy season (June to August) makes the hike a bit harder because the path is muddy.

Even though the hike is hard during the monsoon season, the Sahyadri mountains look stupendous during the rains and the lush green vegetation around with the cool fresh breeze is something to die for. This experience can only be felt and cannot be described in words.

The easiest way to get to the fort is by driving. One can also drive to the Sinhagad Fort itself instead of hiking from Sinhagad Payatha.

The Sinhagad Fort is a very popular hiking destination in Pune and is very crowded over the weekends. I would say that Sinhagad Fort marks as a Moderate one day hike as the path does not have defined steps and one needs to walk on the muddy path. This makes the hike a bit difficult.

The Sinhagad Fort was strategically built on the hill as the natural steep slopes that provided protection to the fort.

There are plenty of street vendors at the entrance of the Sinhagad fort and inside the fort. The food here is extremely cheap, fresh and delicious. I would definitely suggesting the different kinds of snacks and fritters (pakoras).

In some of the places, one can see the food being cooked right in front of you. The paranthas are absolutely amazing. My friend and I spent most of the time eating.

There are a lot of people on the track and is a busy track. So, I wouldn’t say that the hike is an unsafe hike. However, be careful on the way to the base of the hike in the taxi and after it gets dark. That would be the time where I would definitely say that it can become unsafe. In a nutshell, I would suggest hiking this trail with a buddy or a group. I visited the Sinhagad Fort with a buddy and hence I felt very safe during the hike.

I have been told that one needs at least 3 to 4 months to explore all the forts around Pune and Sinhagad Fort marks as the beginning of exploration. I intend to go back to the city and live there for a few months and see all these amazingly pretty forts.

11 thoughts on “Hike to Sinhagad Fort”