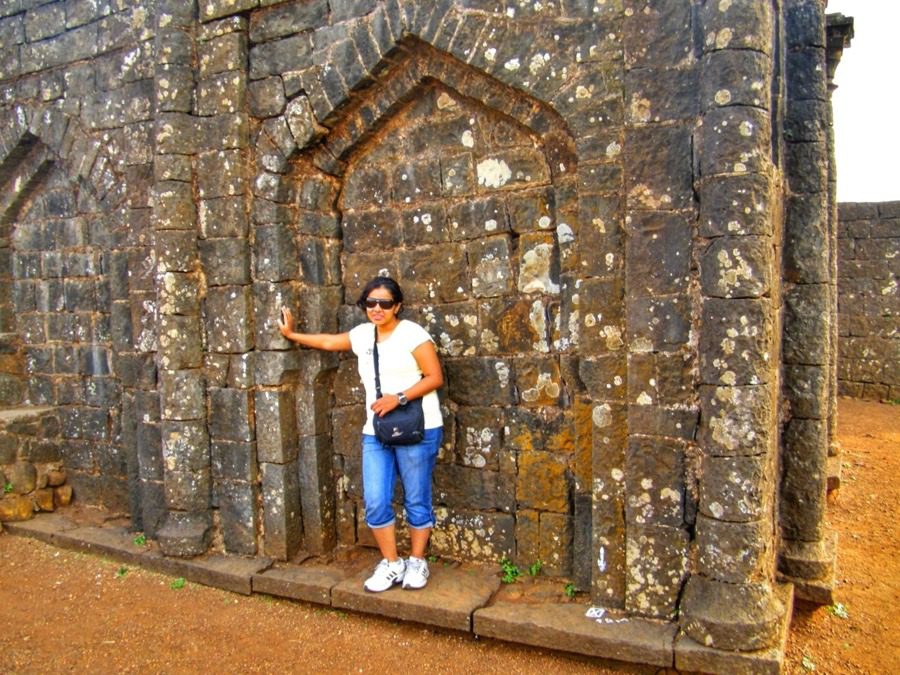 Did you know that India is known for its forts? There are plenty of them and each one has an intriguing story to tell. Many years ago, I went on a road trip to Kolhapur with two of my girl friends and that is when I visited Panhala Fort.

Panhala Fort, also known as Panhalghad or Panhalla Fort, is located in Maharashtra state of India. The fort is very strategically built overlooking a pass in the Sahyadri mountain ranges. And due to its strategic position, the fort has been under attacked by many rulers including the Marathas, Mughals and the East India Company. The most important battle is the Battle of Pavan Khind. The shape of the fort is zigzagged and hence it is also called the Fort of Serpents.

The queen regent of Kolhapur, Tarabai spent her formative years in the fort. The Panhala Fort is one of the largest forts in the Deccan region. It has more than 100 lookout points and is at a height of 845 metres. The architecture of the fort is of Bijapuri style with peacock motifs visible on many monuments in the fort.

The best time to visit the Panhala fort is during the winter season (between the months of October and January) as the weather is pleasant. It is one of those rare historical places in India that is completely free to visit as it does not have any entrance fee. Also, the fort is open 24 hours but it is advisable only to visit it during the day.

When Aurangazeb attacked the fort again, Rajaram of the Maratha Empire fled to Gingee Fort leaving his young wife Tarabai. Tarabai stayed and lived her formative years at the Panhala Fort. She looked after the administration of the fort and resolved people’s disputes and conflicts. Rajaram won back the fort and it once again came under the Marathas. The fort unfortunately went through a few more battles between Tarabai and Satara. Finally, the fort was handed over to the British in 1827.

How to get to Panhala Fort?

The Panhala Fort is located around 20 kilometres from Kolhapur and the road journey takes only 40 minutes. There are many local auto rickshaws or taxis that can be taken from Kolhapur to Panhala Fort. Uber or Ola taxi providers are the safest as they are registered taxi providers. The fort can easily be reached by a car or a vehicle and does not require any kind of hiking or walking. There is a gate outside which there are ample parking spaces.

Make sure to call the Uber or Ola drivers once you book the taxis. They have a tendency to cancel the booked taxis and sometimes they do not notify the customers. Ola outstation cabs work the best for long road trips.

We traveled by a hired car from Belgaum. It was one of the known drivers and hence we did not have any issues.

When you are in Kolhapur, definitely purchase a few pairs of Kolhaphuri chappals. The Kolhapuri chappals are very famous as they are completely handmade and have fine intricate details. They are usually made up of cow leather and natural ingredients. There are many local shops in Kolhapur where you can purchase the chappals. Since I do not buy leather, I purchased a few pairs of artificial leather chappals.

Relatively, I felt Panhala Fort and Kolhapur were safe for female travelers as we did not have any issues. Most people kept to themselves except for youngsters in the fort. However, I would not suggest going alone, especially during the sunset and when it is dark. It is best to either go with a reputed travel agent or a taxi driver who can show you around for the entire day and drop you back safe.

I absolutely loved the Panhala Fort and I also enjoyed visiting Kolhapur. The fort was beautiful and had so many stories to tell. I will definitely go back to learn more about the place. If you are in Maharashtra and have spare days, then I highly recommend visiting this amazing fort.

Do you love forts? And do you love learning about the history? Visit Forts of India section.

2 thoughts on “A visit to Panhala Fort”