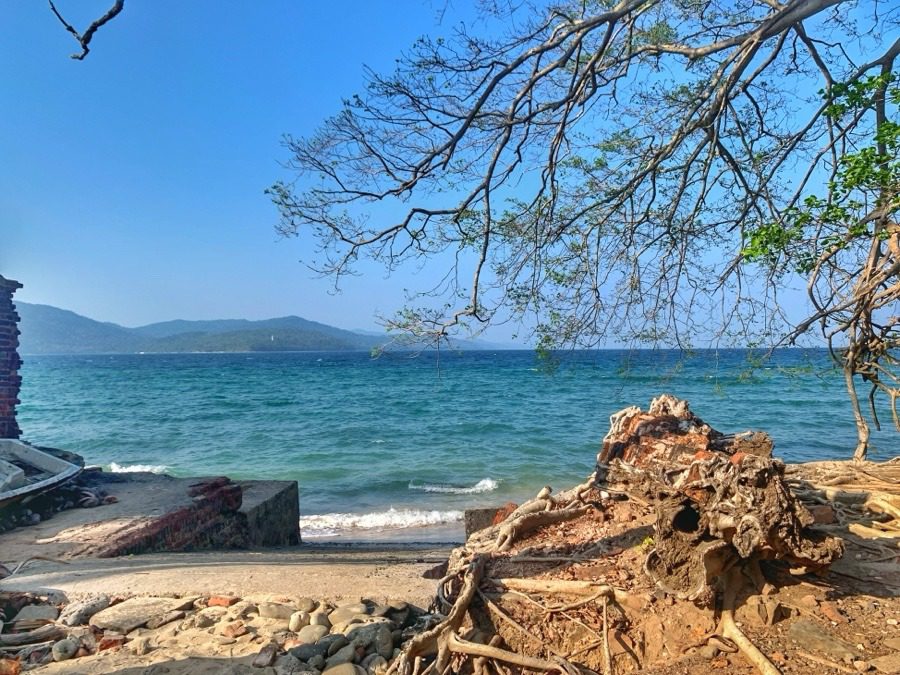 Andaman and Nicobar islands constitute of such amazing islands and history. Ross Island is yet another island that is beautiful and a very interesting place to visit. The island has a lot of history and currently the island still is home to many ruins. There are also a lot of deer, peacocks and peahens on the island.

Are you visiting Andaman and Nicobar islands for the first time? Then start with my travel diaries.

Officially known as Netaji Subhash Chandra Bose island, the Ross island is an abandoned island from the British settlement. The island was originally known as Chong-Ekee-Bood and is smallest island in Andaman islands. Located at the mouth of Port Blair harbour in South Andaman district, this stunning island was named after the British marine surveyor, Sir Daniel Ross. In December 2018, the island was renamed to Netaji Subhash Chandra Bose island.

There are around 100 inhabitants living on the island.

The Ross island is very picturesque and is one of the best islands I have visited in Andaman islands. It is a place where history comes together with striking nature. And the island also has lots of coconut and palm trees.

Established in 1858, the Ross island was an administrative headquarters till 1945/46 and it was abandoned after that. There are still ruins of the bakery, church, tennis court, the Chief commissioner’s residence and other notable buildings. Netaji Subash Chandra Bose stayed on the island in 1943 during his visit to Andaman islands. Currently, the island is administered by Indian government.

One needs at least 2 to 3 hours to cover all the places on the island. And the best time to visit Ross island is in the morning as the day does get hot, especially during the summer season. I highly suggest vacationing in Andaman and Nicobar islands during the winter season (between the months of October and February). The first time I visited Andaman during April and it was a huge mistake as it was extremely hot. But the second time around, I visited in January and it was the best as the days were pleasant and cool.

How to get to Ross Island?

Things to see on Ross Island

A few things to note while visiting Ross island are:

Stop by at Presbyterian church

The Presbyterian church is a ruin of an old protestant church. It is built out of stone and frames out of teak. The quality of the materials used in building was so good that it has survived for so many years. Definitely stop by the church to learn and understand how the churches were built during that time.

Watch the deer at deer park

The island has a deer park that has spotted deer. And there are lots of them on the island. It is great to see these deer enjoying and living lives without any threat. Some of them come real close too but remember not to feed them.

Walk around the island to see ruins

The Ross island tells a story from the past. There are still ruins of the old settlement and buildings, such as bakery, water treatment plant, hospital, cemetery and many more. A walk around the island is a great way to go around and see these buildings that talk about our history.

One can also take a golf cart to travel between the places.

It is worth visiting this charming island? Absolutely yes! It is definitely one of the spectacular islands in Andaman islands and I highly recommend visiting it and making it a one day trip from Port Blair.

Have you been to Ross island? Did you like it? Let me know in the comments below.